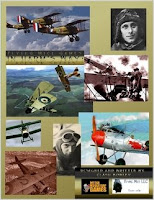 or Jeff's Review of In Harm's Way: Aces in Spades

I don't really do historical straight historical games. The closest I can come is action movie style adventures where the explosions occur in an earlier time period. When I want to do that I usually look to the Wild West or the Roaring Twenties for bullet-riddled faux history. But ever since my buddy Dave got a copy of Dawn Patrol back in the day I've also had a little thing for World War One flying aces. Since Dawn Patrol not much has come out in the way of roleplaying games about WWI pilots. Clash Bowley of Flying Mice Games fills that void with In Harm's Way: Aces in Spades.

Aces in Spades uses a version of Bowley's "StarCluster" house system, which I believe is named after the first game it appeared in. The basic mechanics strike me as very meat-and-potatoes, but I don't consider that a bad thing at all. You build PCs by buying stats and skills. Skills are assigned percentage of success based upon the level of the skill and the rating of a governing stat. To do things you roll percentage dice. Since most of this is old hat, I'm not going to restate the entire system. Instead I'll focus here on the cool stuff and the few nitpicks I have with the game.

I want to talk about two of the stats you purchase at character generation, Luck and Cl

ass. I've seen lots of games with various Luck mechanics over the years, and I think I like this one the best. Your Luck is rated 0 to 3 and that number represents the number of times per game year that you get a lucky break. The players suggests the fortuitous event, but it is subject to GM approval. One example is that the pilot of a damaged plane can use Luck to find a clearing in a forest to land his plane. My players balked at the limited "per year" uses, but for a lengthy campaign I could see how you wouldn't want crazy lucky breaks ever freakin' session. Personally, I find it useful not to think of Luck as some form of 'dramatic editing', but rather as Mulligans or Extra Lives or something like that.

Class is a nifty stat because it gives PCs and NPCs alike an excuse to talk some trash, and who doesn't like a little smack talk in their RPGs? More importantly, buying yourself a high Class score gives you a leg up on the other PCs in the hunt for promotions. Which brings us to one of my favorite parts of Aces in Spades. The players all work together to fight enemy squadrons, but they're also in earnest competition with each other for kills, general recognition, medals, mention in dispatches, and promotions. I like games with that kind of dual competitive/cooperative nature. Truth be told, when I'm a player I tend to approach any campaign that way, but that's another post for another day. If you want to play this game but

need a feel for how the competition could spice up your game, then I heartily recommend the George Peppard film The Blue Max. That movie rocks.

The skill list is a lot longer than I like in pretty much any game, but I like the implementation. Most skills come with but a line or two of description and the text encourages player/GM negotiation for when a skill applies and how it can be used. I like that idea a LOT better than the default assumption in game writing that a skill description needs to outline the exacting totality of its uses. My players were unhappy that the skill system gave their starting characters percentages in the 50% range with meager skill improvements on an annual basis.

As with most games featuring killing things and breaking stuff, combat skills get a little more attention. But those seem pretty straightforward, too. In fact, I'd go so far to say that the only tricky mechanics in the book are the air combat rules. Not surprising in a game about pilots, eh?

As I mentioned, plane-on-plane action is the hardest part of the game. Every plane has a control sheet for tracking fuel, maneuvering, and stuff like that. Fifteen planes of WWI are statted out this way. Stones, counters or dice are used to track fuel/energy, kind of like how Nobilis tracks godlike mojo. I can't tell you which was trickier: mentally tracking the movements of several planes to adjudicate who could shoot at whom with what modifiers, or trying to explain the various maneuvers to the players. I pretty sure I screwed both up. But I have no doubt that had I ran more than one session I would have eventually wrapped my head around dogfighting. The initial mental workload was a little harder than most games I play nowadays, but it wasn't a dealbreaker.

Overall, I really enjoyed giving In Harm's Way: Aces in Spades a try. The StarCluster system feels crunchy in the right places but uses a light touch where I like it, too. The book is full of lots of goodies I haven't mentioned, like random charts to determine the quality of your airfield or a table for dicing up plot points. And the list of things that earn you Notice (effectively xp or glory like Pendragon) suggest lots of nifty air adventures.

I'm not sure there are many competitors out there for this particular historical niche. My 1st edition Savage Worlds has some decent dogfight rules, but it lacks the support of stats for a bunch of different era-appropriate planes. Did All Flesh Must Be Eaten ever get a World War One supplement? I recall that being on the drawing board at one point. For a short flying aces campaign I might go with the Savage Worlds, but I'd sure as heck use Aces in Spades as a sourcebook for such an outing. For a longer campaign meant to play out a big chunk of WWI, I'd definitely go with this game. And I wouldn't turn my nose up at any other game powered the Starcluster system.

You can get a PDF version or print-on-demand hardcopy of In Harm's Way: Aces in Spades from Lulu. The electronic version is eleven bucks, while the paper book runs $23.58 plus shipping.