A Calvalcade of Characters Sheets, part 3

Bart Bolt is the only old PC I have multiple versions for in my records. In all my years of gaming he's the single most successful D&D character I've run starting from zero experience points and working my way up. Bart was created for Dave Dalley's 2nd edition AD&D campaign, originally set in his own setting but later we rode Ziggy's Magic Cabinet to Krynn. To this day I'm not sure if that guy was Ziggy from the comic strip or Ziggy Stardust or both or neither. Dave's campaign almost felt like a buddy action movie at times, with Gopher's highborn swashbuckler Sir Ian Wulfric Belvidere III and my ranger/peasant hero playing off each other's foibles. Too bad that dragon killed Sir Ian near the end of the campaign. He was on a quest to win his true love, too. 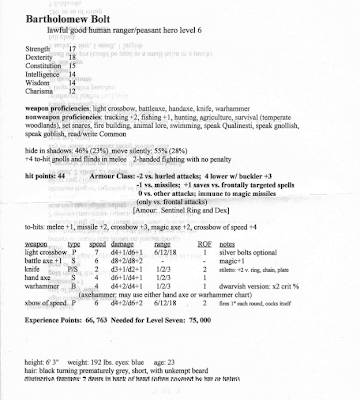 I'm pretty sure Bart was one of the first characters I typed up on a Word Processor. I have earlier versions that are hand written. Each of these character write-ups goes to about 5 pages, as I took a LOT of notes. One page lists pretty much every NPC Bart had ever met, another is a diary of monsters killed. The latter was standard on my charsheets at the time, because both my regular DMs were concerned about my PCs acting on monster knowledge that they didn't have but that I knew.

Anyway, rather than bore you with 15 pages of a single character, I thought I'd share some doodles I found on various pages. 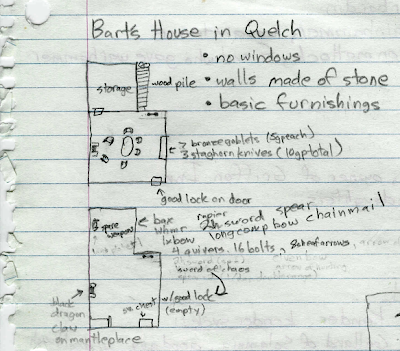 "Quelch" was a little no-account town that my crew and I fought tooth and nail to save from all sorts of wandering menaces. I didn't realize it at the time, but it was basically our home town in fantasy drag. Notice "no windows" on the floorplan. Classic player paranoia. The stuffed dragonclaw on the mantle came from the black dragon that killed everyone else in the party. In the last round of combat it was me solo against the dragon, both covered with grievous wounds. We tied initiative. I killed it, but it simultaneously knocked me to exactly zero hit points. Only timely intervention by an NPC allowed me to live to claim that draconic trophy. 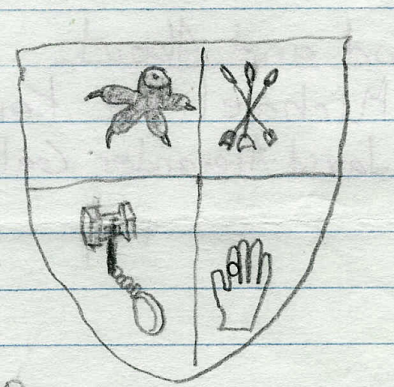 An attempt to draw a coat of arms for my dude. He wasn't a knight, but I had hopes. Again with the dragon claw. The hand in the bottom right is actually a white glove with a blue gem on the index finger. That's a token from one of Bart's greatest adventures, when we played through Graeme Morris's epic two-parter UK2 The Sentinel and UK3 The Gauntlet. The item in the bottom left is a warhammer with a Kirby Thor-style lanyard. 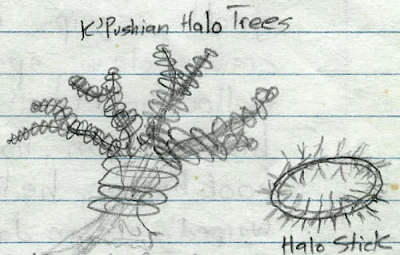 The Halo Trees of K'Pushia get their name from their strange circular branches covered in white fluff. I think we went on some sort of adventure to get a Halo Stick and two other items for some sort of magic spell. I have the words "Kirchin Vaolup Leaves" and "Stinking Nelfose Roots" written on that same page. I vaguely remember they were all supposed to end up in a fey cauldron or something.