The past few days I've been feeling the urge to break out the old BattleTech stuff for some sci-fi wargamery. Back when this stuff first came out in the eighties B-Tech was a big thing with my group. For a time it rivaled and perhaps even surpassed D&D in our affections. I talked to my 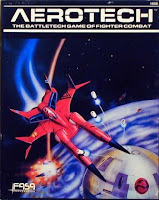 buddy Pat and he seems amenable to the idea of writing up and playing out some scenarios.

I think I'm going to start with some Aerotech action. As far as I can tell this spacefighter add-on to BattleTech never quite caught on. I bought the boxed set when it came out in '86, but my crew never played it. I blame the production values. The playing pieces were standard wargame chits in two colors, not the full-color stand-ups you got with BattleTech. And the map was double-sided doom. The low altitude map, where you could intereact most easily with BattleMechs via strafing and bombing, was blank white with a black hex overlay. It was literally the most boring hexmap you could possibly create.

Meanwhile, just looking at the space map made our balls hurt. The gravity well markers might have been a good idea mechanically, but it discouraged us by looking complicated. Here's one sixth of the space map: 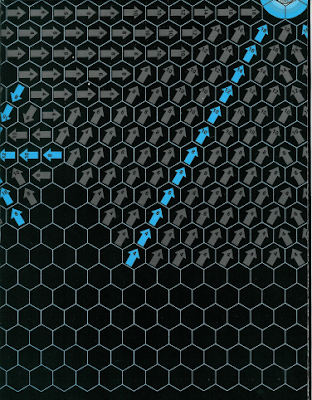 Admittedly, that's the worst sixth of the space map, where the gravity wells of the planet (you can see the atmosphere in the upper right corner) and the moon meet. Even now I look at that map and think Man, I don't want to screw around with that crap. But I'm older and a little bit wiser than I was when this game came out. Nowadays I realize that, hey, I don't have to use FASA's sucky maps if I don't want to. So for space battles we'll use a map that isn't junked up by gravity wells. Either we'll ignore gravity or gin up some easier to use rules, or steal the simple-as-dirt grav rules from Star Frontiers Knight Hawks. And for the low altitude map, welcome to Planet Blitzkrieg, hope you survive the experience:

The Lyran Commonwelath, a.k.a. House Steiner, will be playing the role of the Great Blue defender, while the Draconis Combine (House Kurita) is cast as the Big Red invader. Each hex on the old Blitzkrieg board will equal one BattleTech tactical map, which also happens to be the standard scale for Aerotech planetside operations. B-Tech artillery pieces have ranges measured in mapboards, so we should be able to use some combined arms with this set-up. But we'll start with a simple skyduel involving a couple fighters apiece.