Metal: Is there any ill it can't cure?

Yesterday I had to drive to Bloomington, Illinois for work. While I didn't have anough time to meet my sister for lunch (sorry, Jen!), I swung by campus town to hit Acme Comics, a great comic shop that I hadn't visited in a couple years. The Acme website has a great sense of comic book style, by the way. But it turns out that on some weekdays they don't open the store until freakin' noon. This is my inner Grumpy Old Man coming out, but dammit, I expect my stupid specialty stores to act like respectable businesses. And that means, among other things, having normal business hours.

I get really annoyed when I'm looking to buy something, I appear to be at the right place, and no one will take my money. Whether I get some new issues of Marvel Two-In-One or Luke Cage, Power Man isn't a life or death issue to me. But opening at the crack of noon? That's pretty effin' weak.

Still, not all was lost. The used bookstore down the street was open when I arrived at 11:15. They got my money and I walked out with several Earl Dumarest novels. The record store down the way also got some of my money as well, in exchange for this CD: 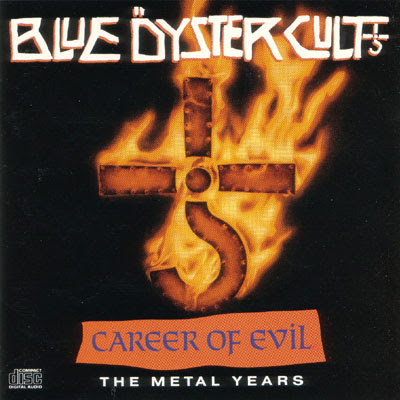 My pal Pat has nearly everything Blue Oyster Cult ever recorded, but I couldn't pass this thing up. It's named after one of my favorite BOC songs, but for some reason they didn't bother to include a track of "Career of Evil". Weird. Still, I wholeheartedly endorse any CD that has both "(Go, Go) Godzilla" and "(Don't Fear) The Reaper". The latter is one of my absolute favorite rock songs, right up there with Aerosmith's "Dream On".

I listened to this bad boy on the drive back to the office. Turns out it's concert tracks from BOC's heyday. Which means the songs are a little indulgent with the guitar solos and audience participation and such. Still, good stuff all around. By halfway home I had forgotten my annoyance with Acme and was rockin' out hard.