Jeff Mejia, also known as the Evil DM (maybe NSFW due to cheesecake), was kind enough to send me his copy of The Spider's Test. Thanks, o Evil one! 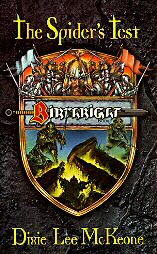 It must be admitted that I'm one of those snobs that looks down on game fiction. As a guy who reads comic books and watches pro wrestling it's a tad bit silly to be this picky about my stupid fantasy novels. But the game authors of the 90's conspired to make me this way. All those rulebooks with chapters devoted to telling the me the exciting tale of the author's pet NPCs pretty much soured me on any fiction with a gameline logo on the cover. The last game fiction I read would probably be the first few Gord and Dragonlance books. Those came out while I was in high school or maybe junior high.

Well, I did read the entire Cyborg Commando trilogy a couple years ago, but those don't really count because I already knew they were going to be atrocious. Seriously, the only virtue of those books is that their awefulness directly parallels the RPG. Egads.

But if the Evil DM says I would probably like a book, I take that pretty seriously. Even if it is game fiction. He's one of my online buddies who gets Robert E. Howard. And when the guy goes to the trouble of sending me his extra copy, how can I turn up my nose at that? I haven't read the book yet, since I just got it, but you can read the Evil DM's take over here. (Again, scantily clad girls may make that link NSFW for some.)

Later today I hope to get to the post office, so I can return the favor. I happen to have recently acquired a spare copy of a novel in what has become my favorite sci-fi series. 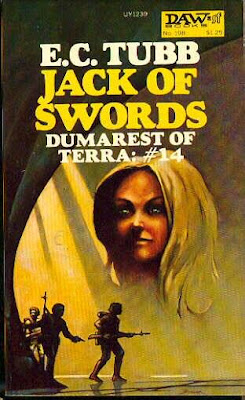 I don't want to oversell E.C. Tubb's Dumarest of Terra series, since at its heart what you have here is a fairly formulaic and slightly trashy series of adventures in a kinda generic outer space setting. But let me lay out one fact and one opinion that will point to why I love this series.

FACT: Earl Dumarest was the original Traveller protagonist. He bums around the galaxy getting into scraps. In the setting of the novel people who do this are called 'travelers'. And that's not just a coincidence. Other stuff in these books make it clear that this series was on the mind of Miller and crew when Traveller was originally created. Dumarest's weapon of choice? A Blade. It's called a blade in the book and matches the Trav description of that weapon. Dumarest's normal clothes? Cloth armor. His least favorite way to travel? Low Passage cold sleep, which is notoriously dangerous. The universe he travels? A seemingly random jumble of worlds with highly varied populations, governments, and technologies. For Traveller fans this stuff is a golden glimpse into what the game could be like without the massive 3rd Imperium setting.

OPINION: E.C. Tubb was writing Conan in space. This is not a conclusion I came to lightly, but after much consideration. I wouldn't be the least surprised if Tubb's started the series by saying to himself "Hmmmm, Burroughs made a fortune by setting Western stories on Mars. What if I wrote Conan tales but in outer space?" Maybe Conan wasn't Tubb's conscious goal, but man, he sure delivers. Earl Dumarest is your basic Howard style hero: full of life, deadly in a fight, kind when he can be but ruthless where necessary. Dumarest rolls around outer space doing his best to stay alive and unintentionally screwing with the status quo whenever he stumbles onto a world full of corruption and tyranny. If a pretty girl, little kid, or oldster is being victimized, woe unto their tormentors. He'll put his last two credits in a beggar's bowl, then sign up as a pit fighter to make the money for his next passage. Dumarest kicks ass.