Big ups to David Johansen for mentioning this item over at theRPGsite forums. Some folks running an outfit called Genre Webshop are putting out fleet boxes of Traveller capital ships! Here's the best pics I can find so far:

"The Zhodani Consulate are one of the most distinctive factions of the Traveller universe. This fleet box is the first clear visualization of the Zhodani shipbuilding aesthetic and style, and has the Vipechakl battleship, Kevchenzh armored cruisers, Zhdavldlitz light cruisers, and Zhdiak Light Destroyers." 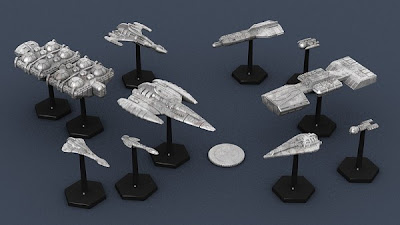 The bulk tanker among the Zhos is a future release. All these pics are CGI, but as I understand it the CGI data is being used to produce the figures. So hopefully they'll actually look a lot like these fake-ups. Isn't CAD/CAM awesome? The disc on the ground is the same diemensions as a U.S. 25 cent piece. (That's roughly 23mm or so for you folks not familiar with the American quarter.) Each fleet box is sixty bucks and pre-orders are being taken here, with the product release expected in late spring or early summer.

What's great about these fleets is that they are very distinctive to the Traveller fan (Did any Trav fellers miss the Azhanti class in those pics? I doubt it.) but they also work just fine as generic sci-fi vessels. I'd feel just fine using these figures in, say, a SpaceMaster campaign, whereas I'd think a table full of Star Trek figures would be too distracting.