The adventure opens with the warriors three (Erik the Conqueror, Hjorek Hafgarson, and Grandfather Thorne) chillaxin' down at the meadhall. Erik is doing his best to impress Inga Vast-tracks, the barmaid, with his tales of how he almost conquered the kobolds last session, while Hjorek is dropping some mad Norse rhymes. Meanwhile Grandpa is eyeing the Mysterious Elf sipping wine in the corner. No one knows for sure where Zoyd Sampson is to be found, but there's a rumour floating around the Keep that the local lord's daughter has taken a shining to him.

Suddenly, an ill wind starts blowing in from the direction of the Canyon of Chaos. On its accursed breeze floats an eerie chanting. Kuvartma! Kuvartma! Tekeli-li! Kuvartma! Ia! Before the full import of this omen may be ascertained, there's a crash like thunder as a huge inhuman thing bursts through the rafters of the hall will a howl from the very pits of Hel itself. It's shape is not completely unlike a great ape, but with the additions of curving horns and batlike wings. The barmaid screams.

The assembled adventurers spring into action, but they are caught unprepared. They have no armor girding their loins and their fiercest weapons are not at hand. Still, they mount what defense they can. The enigmatic elf has a bow at hand and immediately begins firing arrows into the nightspawned abomination, but most of the volley bounces off the creature's preternatural hide. Hrojek and Eric, unprepared though they be, leap into the fray, engaging the hellbeast in close combat. For that they pay dearly. Each of these braves heroes is struck down by claw and fang.

Hoo, boy. This was heading towards a TPK and it was all my fault. Being short a man and not having their armor on really hurt the ability of the PCs to fight Kuvartma's Messenger. At one point Erik was legally dead, but since I had engineered this disaster I felt duty bound to undo that. I'm usually not shy about these things, so I announced "The elf pours a Potion of DM Fiat down your throat and you're not quite dead." 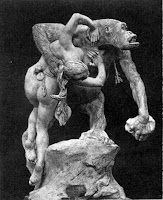 While the two fighting men are down the winged monster reaches out a mighty paw and grabs the girl. Her screams echo throughout the keep. In a moment the thing takes to the air with its captive and wings its way through the moonlit sky towards the caverns. Most of the heroes want to immediately stage a rescue on the monster's home turf, at night. But cooler heads argued that the party is already grievously wounded and such a task would be suicide. Everyone begrudgingly agrees to the wisdom of this strategem, despite the additional danger a delay might pose to Inga.

The three heroes set out for the Canyon at the first light of the next day. The Mysterious Elf is nowhere to be found. The fresh tracks in the mud in front of the kobold-occupied cave are much too large for any small humanoid to have made. Entering the cave, the adveturers are pleasantly surprised to find no guards posted in the first room. In fact, an exploration of a large portion of the cave complex shows several areas to be empty. There are even some signs of rooms being recently cleared of contents. Several mysteries are investigated but not fully understood, such as kobold-barricaded door with nothing but a strange corpse beyond and a single horizontal metal bar across a passageway entrance (which they figure out later was an old curtain-rod).

Finally, our heroes see some action. The come across a large chamber with a sizeable pool in the center and two other ways out. At the pool are four kobold women filling buckets of water. At the double doors across the room are two kobold guards. As the washer-women flee up the stairs one kobold guard charges Hjorek while the other summons help from beyond the guarded door. Grandpa Thorne judiciously chucks a spell grenade (sonic burst, IIRC) up the stairs and into the guardroom where the kobold females had fled. Meanwhile Erik and Hjorek were ac

ross the room dealing with enemies appearing from beyond the doors. Eerie chanting could be heard from the other side as kobolds in ceremonial garb rushed out to engage the heroes with their wicked little spears. The robed leader of the kobolds eventually appeared, firing laser beams of pure anti-matter from his hands.

While Thorne the Dwarf's sonic attack had delayed enemy action from the stairway, it did not halt it. Eventually a dozen or so hardy kobold warriors rushed down the stairs and Thorne drew a line in the sand, intent on holding them off so his allies would not find themselves surrounded. At an opportune moment Erik used his magic to enlarge the dwarf, but still the kobolds attempted to outmaneuver him. Several waded into the water, but they were cut down by Thorne's axe, turning the pool into gorey chum.

Hjorek, channeling the might of ancient heroes, pushes through the kobold mob at the doors to engage the sorcerous leader. But this old kobold is canny, and falls back while blasting Hjorek with mystic flames. Eventually our hero can see into the room down the hall. It is an unholy shrine of some sort. Two kobold acolytes chant over a naked Inga, who is chained to a bloodstained altar under a crude wooden statue of a winged gorilla. Later these two altar boys would attempt to sneak through the melee and flee, only for Erik to take time from his busy kobold-fighting schedule to brain the both of them.

After much hullabaloo the spellslinging kobold is slain, along with one of his two elite warrior cronies. The other elite kobold, grievously wounded, offers a truce in crude Common "Spare me. Show treasure." Erik hesitates for a moment and Hjorek walks up behind the poor little bastard and knocks him out with the pommel of his sword. The six or so remaining kobolds are slain, with the exception of a single kobold warrior who dives into the pool of water and is not seen afterwards.

The post-battle party was kinda rough around the edges. In keeping with his personal goal of ridding the continent of all the monsters, Erik dispatched all the non-combatant kobolds he could catch. It was suggested that he had sex with Inga on the altar. While it strikes me as ridiculously unrealistic to think she'd be in the mood under the circumstances, the idea did fit in pretty well with the Conan groove we were operating under. I took 'the monster grabs the girl' right out of the R.E. Howard playbook, so we might as well see the situation all the way through.

The spared kobold really did lead the party to the secret treasure trove. The wee git is killed when the party insists he open the chests. The first three go just fine. They contain copper pieces, silver pieces, and rock candy. Kobolds love rock candy, didn't you know? The fourth chest was full of trap, and the kobold fell over with a face and chest full of dart wounds. The last chest had some gold in it. The kobold leader also had a wand of cure moderate wounds and a magic amulet on a chain that has the properties of giving a +1 natural amor bonus and as well as a refillable necklace of missiles.

The party ended the session by travelling to the town of Osvar, where they sold the kobold's ape-idol to Osala the Sagess. She's got a passing interesting in the religious practices of humanoids.

Other than the near-miss with the Total Party Kill, I had a pretty darned good time. The players seemed to be digging it as well. Now that the kobolds have been eradicated we can turn our attentions to other parts of the Canyon of Chaos. Doug also suggested that an eventual goal for the party should be to found their own settlement. That sounds pretty cool to me, and well within the scope of our Viking colony theme.