the mysterious mercenaries of Sark

The AD&D toyline of the 80's had 3 basic types of toys in it.  The most prominent were the articulated action figures, similar to the G.I. Joe and Star Wars toys of the era.  Less well known were the bendable and solid PVC sublines.  I owned a bendy Grell and it was hella sweet.  Though it had eyes and everyone knows canonical grell are giant beaked and betentacled brains with no eyes.  The solid PVC figures were mostly monsters like trolls or mummies or NPCs like men-at-arms or wood elves.  It's this last category, solid non-articulated NPCs, that I'm talking about today.

As a kid this duo, the Sarken Mercenaries, was one of the great mysteries of AD&D toydom: 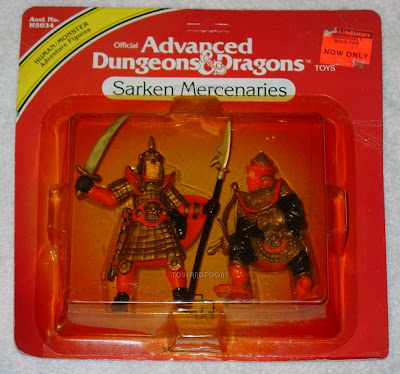 Dig that sweet polearm and the archer with his ninja-esque facemasque.  Anyway, the thing that bugged me as a kid was "Wear the hell is Sark?"  I couldn't find it on the map of Greyhawk or the Known World, the only two settings that mattered to me back then.  Back then I couldn't resolve the issue.

Yesterday for no particular this question popped into my mind for the first time in decades, so I hit up the Wikipedia to see if there might be a real world Sark involved.  Clearly these guys aren't from Sark, the tiny Channel Island.  But maybe they're from Särkland, a Viking term for the Abbasid Caliphate or maybe Sarkel, a Khazar city.  I really like the latter idea, but then I'm a big fan of Milorad Pavić's novel The Dictionary of the Khazars.

Check out this link for a sweet customized Sarken mercenary action figure.