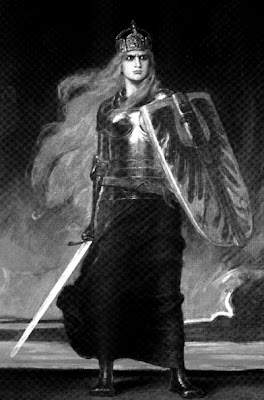 Mostly today's post is an excuse to show you this kick-ass valkyrie picture I found.  But it reminded me of a point I wanted to make regarding pseudo-historical D&D.

One of the neat things about running a pseudo-historical D&D game instead of a strictly historical RPG is that one is not tempted to be that guy.  The one who gives female players hassles over the way women were treated back in the day.  A few thick-headed DMs can't seem to figure out that having fun in a fantasy setting is not helped by whacking the player over the head with endemic sexism, racism or homophobia.  Apparently it never occurs to these knuckle-heads that even in our relatively progressive society people put up with more than enough of that crap in the real world and that fantasy gaming is meant as escapist fun.  If you want to play some narrativist hippie indie game where exploring these issues is the whole point of the operation, more power to you.  But D&D seems to work better for most people when it is about reckless adventure, gratuitous violence and flaunting societal convention.

You can still use these issues in your D&D games, but for plot fodder rather than a hammer beating down your players.  One of the reasons Empress Maude is denied the throne of England is because *gasp* [clutch pearls] she's a woman.  And Siffrid, Bishop of Chichester, is still deposed from his church office in 1145 because apparently the dude was gay.  Clearly an enterprising DM could make some hay out of these facts.  But in my campaign those events didn't just happen because everybody back then mistreated ladies and queerfolk.  They happened because some people mistreated ladies and homosexuals using a variety of pretexts and bodies of law written by previous generations of misogynists and homophobes.  In other words the problem isn't 12th century English society, the problem is that some people are douchebags.

You can build an argument that I'm making my game less realistic by compromising my simulation of southwest England during the Anarchy, but I've already got Cornwall terrorized by a dragon and an advisor to King Stephen who is a tenth level magic-user.  And if I'm accommodating the players who enjoy Gandalf or Legolas knockoffs, not making room for other players and their characters would just be rude.