my last post on funky dice for a while 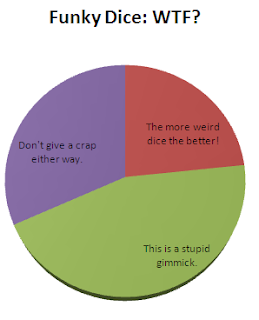 This chart is based upon the responses to question #4 in my post last Friday, asking if the weirdo dice used by DCC changed your opinion of the game. I've posted excerpts of all the results counted below the jump.  There's a little room for interpretation as to where certain responses should be counted, but I doubt the general shape of the chart would change much.

When I first heard the DCC rpg was using the oddball Zocchi dice I thought it was a stupid gimmick as well. Playing in last GaryCon's playtest/demo session and reading the beta has completely turned me around. I see several good implementations of these dice. And the idea of having to remember "Oh, yeah. I need to reroll any 8's every time I make this roll" gets my goat.  So for my birthday next week I'm getting oddly shaped pieces of plastic. (Not the first time.)

I can totally empathize with people who wince at the additional cost or the prospect of convincing their game group to buy these dice. Since I run an open game at my local gamestore if I want to run the DCC rpg I'm pretty much setting myself up to buy dice for a whole game group.  But when I think about all the money I've sunk in read-but-never-played rulebooks and used-once-for-that-one-awesome-fight miniatures over the years, my fairly meagre dice collection starts to look one of the better investments I've made in the hobby.

Q: Does the need for these funky dice change your opinion about trying the DCC rpg?