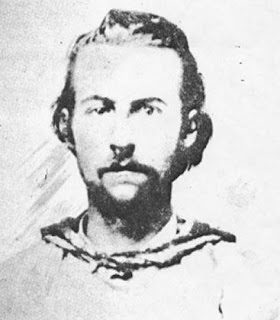 Tonight is the first session of my new Boot Hill campaign, which I decided to call Spectre of the Gun.  The first phase of the campaign involves recreating some historical Old West gunfights, with the PCs standing alongside or in place of the various actual participants.  I stumbled across this photograph of George Selvidge while researching one of tonight's scheduled shoot-outs.  I wasn't looking for photos and the scenarios for tonight are based upon fairly obscure events, so I wasn't really expecting to find any.

Mr. Selvidge was a member of a posse out of Fort Smith, Arkansas led by a couple of Deputy U.S. Marshals.  Depending on who you ask, they were either ensuring a killer was brought to justice or interfering in tribal affairs/violating a treaty.  Either way, George was one of the many folks who didn't live to see the end of that day.  I figure if I'm going to exploit his death for an evening's entertainment, I owe it to the guy to at least share his picture.