If you think the DCC rpg is a dice-selling racket... 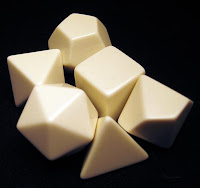 ...there are alternatives to funding Colonel Zocchi's retirement.

My buddy Stuart owns a d6 labeled 1 to 3 twice.  The number is in a weird font so it's easy to pick out on the table.  I'm not sure where to buy one though.

Chessex sells blank polyhedrals.  You could make your own cubical d3.  A d10 numbered 1-5 twice ought to be a snap as well.  The d7 could be d8 with the 8 replaced with an R for "reroll that sucker".  A blank d20 with four or six R spaces could be used for a d14 or d16.

(If you don't already own a d30, you need to hop on the bandwagon.)

Maybe someone could talk Crystal Caste to manufacture some of their signature prism-shaped dice to fit the sizes needed.  Or some 3-D printing/fast prototyping people could get on the case.  A sculptor who works with CAD/CAM type software may be able to produce whole new shapes for our random number needs.

Or we could all go back to drawing chits from a cup.  I suppose nowadays instead of cardstock squares we could paint numbers on those little glass beads and put them in tiny bags.

Kevin Cook, the Dice Collector, suggests Shapeways as a place to get weird dice.  Doesn't look cheap, but there's a d7 with symmetrical faces right on the first page.

So you don't have to sift through 27 pages of weirdo dice (though don't let me stop you), here are the ones I found relevant to this discussion: