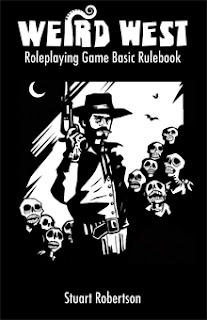 So, hey, this is pretty cool.  Weird West is a tiny little RPG with just enough rules to bootstrap a one-off game or mini-campaign filled with spookiness and cowboys.  There's no setting fluff or sample adventure here, but scenario ideas are easy to come by.  Just take your favorite Western movie or TV show and add a vampire or witch doctor or somesuch.  Or rewrite an old X-Files episode for the year 188x. Personally, I'd probably steal from one of the mid-eighties Incredible Hulk issues penned by Bill Mantlo.  As I recall many of those are Western drifter-type stories but instead of the Man With No Name in Texizona, they're the Jade Giant in some weirdo dimension.

Anyway, one dollar American will buy you the one page PDF, which you then print out and origami-ize into an eight page booklet, PocketMod style.  The result is a rulebook you can literally store in your wallet.  I think it's super-great that Stuart Robertson picked this format, especially for a non-D&D game.  The PocketMod D&D variants I've seen make it clear to me that 8 micropages are insufficient for a useful range of full blown Gygaxian building blocks like spells and magic items and monsters. But anyone with a fondness for a non-D&D genre of RPGs and a desire to write a short and sweet ruleset should check out Weird West. Stuart does a great job of working in the format.  The main text is readable, the headers are in a cool font that works when scaled down, the layout is clean and efficient.  I'd love it if 20 people read Weird West and were inspired to do their own PocketMod niche game.

I've only got two very minor nitpicks with this game.  One of the things you do during chargen is pick a "path": Adventurer, Gifted, Fighter or Magician.  Adventurer, Fighter and Magician are easy to wrap my head around.  Gifted works as a sort of half-Fighter/half-Magician hybrid, which is a-okay.  But the term "Gifted" itself just doesn't say anything useful to me.  I wish it had a better name.  The other thing is that the lists (weapons, sample dice tests, what happens when you run out of hitpoints) are ordered weirdly.  Instead of finding what I need immediately, my search is slowed and I start thinking about what the heck is wonky with this table rather than what I wanted to look up.

Still, for one page/8 tiny pages Weird West gets the job done admirably. Previously, if someone said to me "Hey, let's play a game with gunslingers and zombies" I would have reached for Savage Worlds, but now I think Weird West would do the trick.