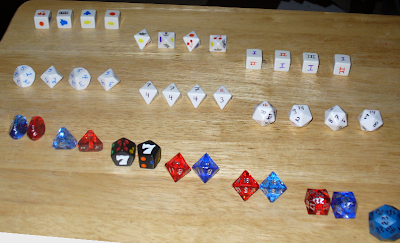 My birfday was last week and my wonderful wife got me some funky Zocchi dice.  Those are the crystal blue and red ones in the bottom of the pic.  I ordered the 2d7 and a precision edge d30 to complete the set.  It's a little weird that for all his patter about the superiority of his precision edge dice, Colonel Lou only sells d7's as round-edged, pre-inked jobbies.

I inked these dice with an extra fine Pilot brand silver paint pen.  I first tried using a black ultra fine Sharpie, my usual inking tool, but it just didn't show well with these translucent dice.  Unfortunately, I wasn't used to working with a paint pen and made a bit of a hash of it.  The extra paint ought to wear off with use.  One of the d24 has the largest sprue flaw I've ever seen in Gamescience die, such that I feel I'm going to have to sand it before I use it.  The other d24 is just fine, though.

The other dice are Koplow and Chessex blanks.  I've had blank d6's for years.  The blank d8, 10 and d12's I got last weekend in Bloomington, IL.  My excellent local game store, Armored Gopher Games, chose not to participate in Free RPG Day.  Something about not liking the terms for getting the goodies.  Anyway, I really wanted the freebie Dungeon Crawl Classics module and I was going to Bloomington anyway, so I swung by Gryfalia's Aerie to get it.  I only had about 2 minutes to visit their new shop, but it seemed like a nice place.  They had some blank dice on display, so I got some.

The d6's and d8's at the top of the picture are slot and zowie slot dice respectively.  The rules for gambling with slot dice are in Appendix F of the original Dungeon Masters Guide.  The basic deal is that payouts are made against two cherries and anything else or three of a kind, with a sliding scale topping out at three cherries (36:1 payout) for the d6 variety or three crowns with the eight siders (100:1 payout).  I made a set of slot dice once before and they were a big hit with the players, but the ink wore off.  So this time I sprayed the dice with a clear acrylic.

The other dice are attempts to make cheap substitutes for some of the weirdo Zocchi dice.  I plan on using the real deal Zocchi dice myself, but buying enough for everyone at the table seemed costly. The d6's are d3's marked with Roman numerals.  The d10's are labeled 1 to 5 twice.  If I had been thinking I would have put a plus sign on half the numbers, so they could also work as regular dice.  The d8's have a red letter 'R' for reroll instead of an 8.  And the d20's double as both d14 and d16.  Four faces on each are blank.  The fifteen and sixteen are red, to remind you to only use them if rolling a d16.