So way the heck back in Sep-friggin-tember I started a cover-to-cover write-up of Dave Hargrave's original Arduin Grimoire.  You can go back and read the first seven installments here, here, here, here, here, here and here if you'd like.  Here's where I got stuck trying to prepare part 8: 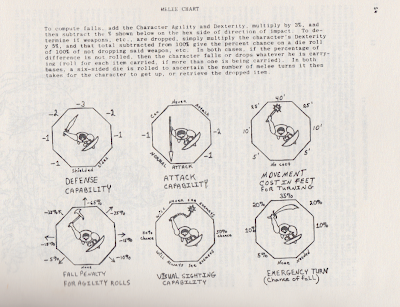 The combat section is where the Arduin Grimoire goes off the rails for me and tackling it was looking like the opposite of fun.  But today I'm going to try it.

Before I dive into 15 pages of combat rules and chartery, there's this single page on alignments.  Here Hargrave gives his thoughts on threefold alignment, which is kinda unexpected given that 35 pages earlier he served up a chart expanding the ninefold system.  Feudal England, Nazi Germany and modern socialist Sweden are given as examples of Lawful society, so watch your back.  Also, here's a little story from Hargrave:


A party of three went into a dungeon.  One was chaotic, one neutral, and one lawful. During the course of the expedition they caught a troll and were discussing what to do with him. The lawful guy said, "Tie him up and let's move on." The neutral said, "No, let's put a rope around his neck and let him be our point man and open all the doors and test for all the traps," and the chaotic said "Phooey! Let's put him too the torture and see if he knows where there is some treasure," at which point an amoral spider came around the corner and ate all of them.

The next three pages are entitled "General Notes on Monsters, Combat and the Like."  Basically this is a bunch of rulings Hargave has come up with.  Here's a sampling:
There's a lot of good ideas and a few very odd ones, but overall they strike me as the sort of thing that a DM should figure out on their own.  You'd be better off drawing up your own list of miscellaneous rulings than adopting Hargrave's wholecloth, in my opinion.

Next up is a section on "Movement of Men and Monsters", wherein the standard movement rates of D&D are found wanting.  There's not much to get worked up about here if, like me, you don't use a tactical display very often.  Maybe Hargrave is right that D&D movement is about one tenth as slow as would be realistic and maybe everyone should be allowed an extra adrenaline-based burst of speed, but I'm just not into it.

So now we arrive at the page I showed up at the top of this post, the Melee Chart.  I can understand some folks wanting to take facing and turns and shield positioning seriously.  But I feel differently. If I have time to worry about details like this in such a systematic way then not enough crazy stuff is happening.

Then we come to four pages of weapon charts.  Normally I'd be all into 4 pages of death-dealing implements, but these leave me cold.  Two pages are weapon versus AC charts, just like out of the 1st edition AD&D Players Handbook.  The other two are damage charts.  Remember how in AD&D1 weapons do one range of damage versus small and medium foes and another range versus big dudes?  Instead of 2 categories we've got 12 here, by hit dice.  So if you attack an orc in chainmail with a broadsword your attack roll is normal and damage is 1d8.  Use that same sword against an ogre in platemail and you're -2 to-hit but do 1d10 damage.  Why?  Why do 2-handed swords do 2d10 damage against creatures with 6+1 to 8 hit dice but 3d6 against 6 or 9 HD?  I just don't see anyway to justify this sort of thing.

The to-hit chart that follows isn't that different from D&D.  A first level fighter needs a 10+ to hit Ac9 and gains +1 at levels 3, 5, 7, 9, etc.  Clerics work the same but they don't get their first advance until 5th and wizardly types have to wait until 7th.  Then they advance at the same rate as the fighters.

Pages 60 and 61 are the infamous Arduin critical and fumble charts.  These are some of the greatest charts ever written for gaming, but use them at your peril.  You can check out my transcription of the crit chart here.  The fumble chart is less gruesome, but almost as big a pain in the ass when it affects your character.

The last two pages I'm going to cover today are the Brawl Charts.  If I'm reading this right every round of a brawl you choose one of 24 attacks.  These range from the prosaic Right Cross and Left Uppercut to  low, medium or high Flying Dropkicks to the 'Rowdy' Roddy Piper approved Double Ear Clap.  You also pick a defensive move along the lines of Duck Right, Jump Back or Turn Sideways.  You cross-index your attack against your foe's deense to find out your damage range.  Most damage is temporary but every successful strike has a percentage chance of actually hurting people.  I really like these brawling charts.  There's room for some interesting fights.  People fall down and get stunned and pull all sorts of shenanigans.

Okay, that's enough for today.  The next sections involve were-apes and dinosaurs and sharks, so I doubt you'll have to wait months for me to tell you about 'em.