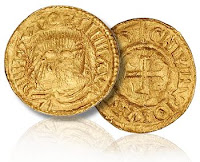 The Solidus is an ancient gold coin, minted from the 4th century to the end of the Roman empire.  Usually they have the face of some emperor on the front and a cross on the reverse.  A lot of more of these things are in circulation in my campaign as compared to the real world.  That's because back in the day King Arthur scored a lot of them in his adventures abroad and spread the wealth around.

The silver Penny is the only coin that has been minted in the area in any significant number.  Most of them have some dumb dead king on them, with a cross on the back.  Many mints currently producing coins in my campaign have switched to putting something else on the front, just in case Empress Maud unseats King Stephen.  For smaller transactions it's pretty common to cut pennies in halves or quarters (the halfpenny and farthing, respectively) but adventurers don't normally deal with such trifles.

It takes about 100 Solidus coins to make a modern pound of weight, while Pennies come in at about 300 to the modern pound.  So for encumbrance purposes a mixture of both kinds of coins counts as 200 to the pound.  Not that I ever remember to bother players with encumbrance.

A lot of smart people have argued that realistic medieval type D&D games should switch from the gold to the silver standard.  I see the argument, but I just can't get behind it.  The game is about adventuring and adventuring is about gold, so the setting focuses on gold.  That's good enough for me.

I've agonized about the proper ratio of values between my gold and silver pieces.  20 silver to 1 gold is probably the right answer, but 10:1 makes my life easier, so I favor the latter.