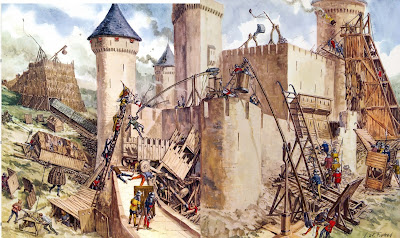 Castle sieges are a pretty big deal for the period I'm trying to evoke in my current campaign.  I've done mass battles in some games, but never sieges.  Anybody have any experience in this field?  Off the top of my head there are two systems you can go to for support in this matter:  Either Chainmail plus the OD&D/AD&D castle & catapult sections or the Siege Machine rules from BECMI D&D (I think those were in the Master rulebook).  Has anyone used any other rules for siege warfare in a FRPG?