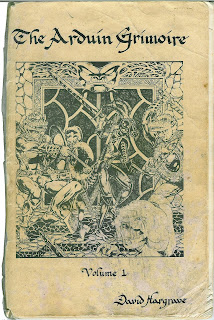 Page 64 of Dave Hargrave's Arduin Grimoire is the WERE-CREATURES COMBAT CHART.  Basically this amounts to a couple dozen regular-type animals statted out with a range of possible hit dice, an Armor Class and some attack/damage info.  Need stats for a jaguar or a condor?  Look here.  For no good reason one of the entries is Dragonet, while everything else here is a normal, real-world animal.  Under the chart proper is a paragraph giving Hargrave's rules for lycanthropes: in wereform you use the animal hitdice, but can advance across the range of possible hit dice as you level up in human form.  Thus a wererat starts out with a measly half hit die when he first joins the lycanthropes, but he'll eventually get bigger and badder.

Next up are two charts full of useful critters: the Dinosaur Chart and the Sea Creatures Chart.  A tyrannosaurus rex can have up to 20 hit dice and bit for 6d12 damage under these rules.  Giant sharks can get slightly bigger than that.  Useful stuff to have all together for lost worlds and nautical fiascos.

The ESCAPE TABLE on page 68 looks pretty amusing.  This bad boy attempts to answer the question "Can my dude get out of the monster's claw?"  Compare class to monster hit die for a base percentage, adjust by victim level and modify by whether the creep has you by its tentacle, claw, hand or jaw.  So let's say your 4th level thief has been grabbed by a ten hit die giant.  Ten hit dice versus thief is a base chance of only 1%, but plus 10% for hands and +10%/thief level ups that to a 41% chance the thief can wriggle free.  Monks are especially good at these sorts of escapades, while psychics and singers are screwed if they end up in the monster's clutches.  I love that Hargrave gives you a percentage chance to escape from the jaws of a monster.  Note to self: shove more PCs into the gaping maws of the bad guys.

Pages 69 and 70 have frustrated me for years.  These are Hargrave's sample wandering monster charts by dungeon level.  I'd be all over twelve level charts with a d20's worth of creeps on each, but there's one big problem.  A whole crapload of monsters listed here aren't in this book!  Many of them are in volumes II and III of the Grimoire, so my copy now has the volume and page number penciled in by those entries.  That doesn't get the whole job done, though, as other monsters on the chart appear in the even-more-obscure-than-Arduin Chaosium product All the World's Monsters.  You can get PDFs of all three volumes of AtWM at RPGnow for less than 8 bucks apiece, but buying a supplement just to unlock features in another supplement makes me cross-eyed with annoyance.  I'm pretty sure the Wilderness monster charts following the dungeon charts have the same fundamental flaw.

Next it is two pages of random weather tables, broken down by season.  If a 4% chance of snow in summer turns you off, look elsewhere for wandering weather.  Inexplicably, what should be the first line in the chart ("1-50 No change in weather") is down at the bottom after the result for rolling 100.

Pages 75-76 is a RANDOM FOG AND MIST GENERATOR CHART FOR DUNGEON ROOMS.  I dig that "for dungeon rooms" bit in the title.  Imagine some kid getting this book, but without that note.  Every time he rolled fog on the weather charts on the preceding two pages he'd probably roll here and make every fog in his campaign world go crazy nuts.  Anyhoo, roll 5d20 on this chart to make a magical fog.  Let's say you rolled 7, 12, 19, 11, 2.  That means you've got a grey fog that smells of coffee and doesn't actually interrupt line of site.  The sound of "stealthy footsteps" can be heard within the fog.  Anyone in the fog suffers extreme heat, losing d6 from their physical stats for each minute they are in it.  A bit overdone in my opinion, but I've used it a couple of times.

Next up is Hargarve's random trap chart, with d20 options for floor traps and ceiling traps.  On the floor chart you can drop PCs one thousand feet to an underground river, five feet into a pile of dragon crap or into the mouth of an awaiting monster. Ceiling traps include disintegrators, black slime pouring onto your head and... oatmeal.  You know I'm not making up that last one.  I wish I could take credit for a trap that dowses the party in oatmeal, but Hargrave beat me to it.

The last item I'll tackle today is the MOST MALIGNANT & MALEFIC MISERIES KNOWN, a.k.a. crazy uncle Dave's disease chart.  We get 15 maladies sorted by location including swamps, moors, deserts, mountains, forests, cities and one arctic disease.  These are way cooler than the realistic system in the 1st edition DMG, with names like Stumbling Mania and Black Bloat.  Not all of them are fatal, but many of the non-fatal ones will blind you, drive you mad, etc.  I wouldn't just outright infect a PC with one of these, but they could make good effects for creepy disease-themed undead or a way to make the players fear giant rats again.