So we've made it to the end of the first volume of the Arduin Grimoire.  Page 94 comes with a little note "THE OVERLAND AND DUNGEON MAPS ON THE NEXT TWO PAGES ARE PROVIDED FOR YOUR INTEREST AND ENJOYMENT" followed by Mr. Hargrave's signature.  His middle initial is A and the way Dave forms it makes the letter look like a 5-pointed start, as if the dude is so metal he has a pentagram right in his name.

The wilderness map on page 93 is a nicely drawn little realm, centered on a lake surrounded by mountains and forests.  Eight little villages and five cities or castles dot the map.  One of the mountains is an erupting volcano.  You know I approve of that.  Overall I like this map but I've got two beefs.  First is a lack of scale.  That's not a dealbreaker but it would be nice to know what Michio (the artist) had in mind when it was drawn.  The second problem is that the southern edge of the lake hold quite a few islands and then south of the shore are what appears to be four smaller lakes.  Without coloring the map it's hard to tell at a glance which little outlined blob is land and which is water.

Here's the dungeon map on the following page: 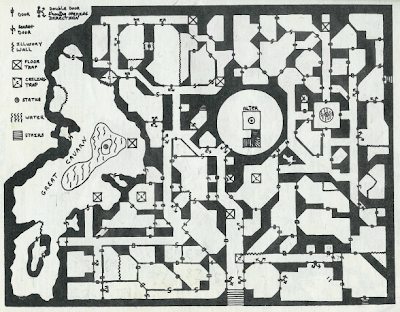 Like most of Hargrave's maps, the sheer quantity of secret doors and oddly-shaped rooms makes my butt hurt.  I could use this map, but I wouldn't enjoy it as much as less crazy-go-nuts layout.

The inside back cover features a table of contents.  You know, that thing that normal people expect in the front of the book.  Underneath the TOC is a listing of products that Grimoire Games of San Diego, CA will be happy to sell you.  You can buy the three volumes of the Arduin Grimoires separately or save a couple bucks by getting all three at once.  Grimoire Games also sells 24 Arduin character sheets, a high level overland & dungeon adventure called DEATHEART and The HOWLINGTOWER, which is described as "Dungeon #2, levels 1-4".  These products'll cost you $6.50 apiece.   I've run the Howling Tower for a few sessions.  Sending in 1st level D&D types seems like a massacre waiting to happen.  Also advertised is the Arduin Adventure, which you can buy as boxed game or rulebook only.  No explanation is given about the Arduin Adventure's relationship to the Grimoires.

Finally, we get to the back cover.  You remember the front cover, with an amazon, a bug guy and Clint Eastwood fighting lizardmen in front of a mysterious door?  The back cover shows that same trio, from the same perspective, after the fight: 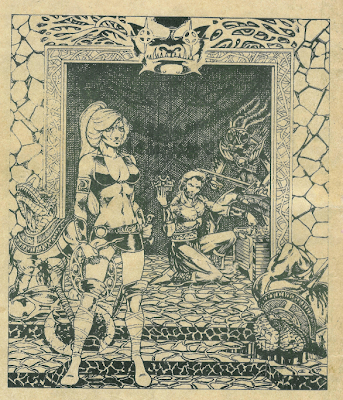 It's a nice effect.  I like the malevolent glimmer in the eyes of the face carved above the doorway.  I'm left wondering if in the original version of this art maybe the adventuress was topless.  There's at least one topless lass inside one of the Grimoires.  More to the point, the way the collarbone can be seen through the fabric of the top can be a tell, indicating what some comics fans refer to as "editorial swimwear".

So that's Dave Hargrave's The Arduin Grimoire: Volume 1.  There's lots of stuff in this book that can be cherry-picked to add a little high octane gas to your campaign.  That's how I've been using the first three Grimoires for years.  Another perfectly valid use of this material is as a particularly elaborate example of how one enthusiastic, energetic referee took OD&D and made it distinctly his.   In this way I like to read the Arduin Grimoire much the same way I do Empire of the Petal Throne and Holmes Basic or even Tunnels & Trolls or Runequest: as a demonstration of the process of bending the rules to your own campaign.