Arduin Grimoire cover to cover: by the 21 Hells!

Pages 85 to 92 of the Arduin Grimoire covers Dave Hargrave's vision for hell and its occupants.  As you can tell by the title of this post, Dante's nine circles are insufficient for Uncle Dave's imagination.

First up is a 22 point list of DEMON LORE: General Data.   You'll have to get your own copy of the Arduin Grimoire, though, as I'm going to hit the highlights here.

Why you shouldn't mess with demons: they attack and save as twice their hit dice, they get bigger hit dice than normal (d10's for lesser demons, d12 for greater, "Major Gods" get d12+3), they don't actually roll those hit dice instead they get max hit points, they almost always attack (75% chance of attacking their own kind!), controlling conjured demons requires you have hit dice equal to their level for a base 10% chance, they regenerate like trolls only better, killing them only dissipates them like a vampire (you can nuke or phaser lesser demons to death though), low level characters panic at their appearance, etc.

Why you should mess with demons: a greater demon might have 500,000 gp, a million ep, five million silver, and a hundred thousand platinum pieces in its lair, up to "3,00" gems, 500 jewelry, ten or twenty magic items and 1-3 artifacts. So basically if you're in Arduin you should sneak into greater demon lairs to burgle their loot when they run out for groceries.  Anything less is small time. 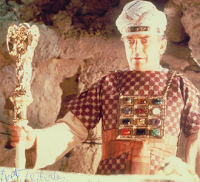 Totally off-topic: My brain keeps telling me that some budding occultist out there could to map this list to the 22 letters of the Hebrew alphabet.  I don't know what would be gained from such an exercise, though.  Al Crowley's Liber 777 ought to be a good place to get started with that.  In general that book could be a great resource for any DM wanting to creep up their campaign without dropping acid. This idea is probably on my mind since the other day I was working on some magic items based upon the gems on the breastplate worn by the high priests in the Old Testament.  You know, like the one that French dillweed puts on just before the Ark of the Covenant blows him to smithereens.

Anyway, the next four pages is a chart detailing the 21 hells in the following four ctageories: primary inhabitants, atmosphere, average temperature in degrees Fahrenheit, and "Terrain, Looks, Notes, etc."  So, for example, the 4th Hell is mostly deserts of black sand with occasional oases of flame, all broken up by mountain ranges of basalt and granite reaching up to 50,000 feet above the plain.  The atmosphere is breathable for short durations but contains enough neon and xenon to affect humans after 4 hours.  How it affects them isn't clear, but a lot of other hell-atmos are specified as being lethal after certain durations.  The locals are wind demons and the average temperature is 55 degrees.  A trio of red moons hang in a purple sky lined with silvery clouds.  Sounds like a pretty interesting place to visit, eh?  There are twenty others.

Then you get two pages of stats for the lesser demon types I mentioned above.  Organization is a problem with pretty much any early gaming product, but having the demons here and the dinosaurs in another place and the general monsters in a third place can be a real pain in the butt.  Still, I won't turn up my nose at stats for seven new demons.  These guys have about 10 hit dice, an AC around 2 or so, and lots of gruesome details and special powers.  My favorite tidbit is that five of the demons have their favorite food specified.  Wind demons go for elf meat, while fire demons like just the heartmeat of elves.  Earth demons like ent hearts, while ice demons enjoy amazon and sea demons prefer mermaid flesh.

A fun item that is mentioned briefly but not explained at all is that demons can be promoted.  At the end of the demon section is a list of names of known lesser demons.  Mithrom, a named Sea Demon, has the note "(now a greater demon?)".  Similarly, the description for Night Demons a few lines above ends with the line "It is rumored that one Night Demon has ascended to "God" status."

So that's the demons and their hells in a nutshell.  I'll end this installment with a great illo from this section: 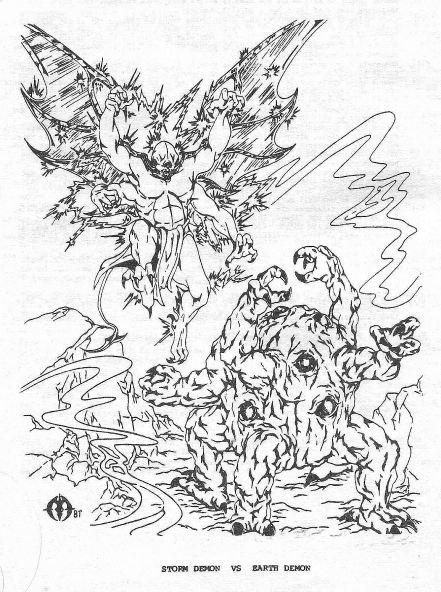