physical artifacts of my M!M! game

Here's the character sheet I put together for last Sunday's game of Monsters! Monsters! I'm pretty sure I made it the Thursday before. 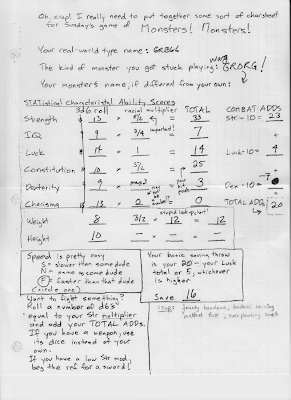 Hmm.  Looks like Gregg's base save should have been 6 rather than 16.  Poor guy used the Adds column by mistake.
N.B. I cheated the baseline mechanics of M!M! slightly for simplicity's sake.  Normally you get an "add" (i.e. a combat bonus) for each point of Str, Dex and Luck above 12 and a penalty for each point below 9.  But when you're running a little-known system in the last slot on the last day of a con, you want to strain as few player braincells as possible, so I set the combat bonuses equal to Stat minus 10.
There's something about crappy homemade charsheets I really like.  They organize PC data a crapload better than just leaving it to the players to write stuff down and they have a lot more character than the pisspoor readouts that end up in the back of so many rulebooks.  Not to harsh on the people who put a lot of work into making good character sheets, but off the top of my head I've really only seen a couple examples of truly outstanding A+ marriages of form and function in this field.  That's be an creepily illustrated Carcosa charsheet that was linked a while back from the OD&D forums and a Savage Worlds charsheet made for a Star Wars conversion.  The QAGS (Quick-Ass Game System) charsheet that has the entire rules for the game on the back gets an honorable mention for sheer utility.
The default system for race determination in M!M! is to deal out a card to each player from an ordinary pack of cards.  A Ten of Spades means you're an Orc, a Knight of Diamonds is a Balrog, etc.  I liked the card idea but recoiled in horror at passing around the look-up chart for stat modifiers.  So this is what I did instead: 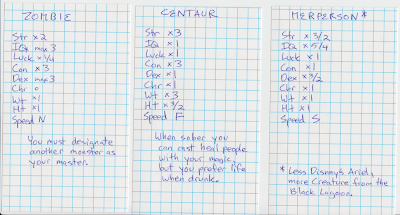 ﻿Note that I cheated again, omitting a card for the Snipe.  Its whole deal is the ability to shapeshift into other monster types, which would require the player to track six or eight different character sheets.  That ain't gonna fly in a one-shot.