It's been months since I was seriously active on any message boards.  The OSR blogosphere has reached the point where it provides me a more than sufficient dose of rpg nerdery, so I have less motivation I guess.  But once in a while I still lurk around a bit, which brings me to this excellent inquiry made by the RPGpundit asked over on therpgsite.com:


Players not generally weaned on earlier editions of D&D tend not to hire retainers/henchmen/whatever. I want to try to encourage the use of them in my upcoming FR campaign


And I was trying to think of good ways to encourage this. Short, that is, of throwing them at the players or giving them away for free or whatnot. But rather, how to convince the players, in or out of game, that going adventuring with retainers (at low levels in particular) is a very good idea.

I've been giving this a lot of thought lately.  Personally, I haven't ruled out the idea of just outright giving every starting PC one or more retainers.  In my experience if you tell a player their newly minted PC comes with a free piece of stinky cheese they will figure out a way to turn that piece of cheese into a dungeoneering asset.  Especially if you DM the way that I do, insisting on 3d6 in a row for stats and not giving a crap if a '1' is rolled on your initial hit die.

Another way to encourage henchmen is to be a big ol' dickbag about the small stuff that a lot of DMs don't sweat.  Who is carrying the freakin' torches?  How are we getting this rolled up tapestry and two chests full of coins out of here?  What do you mean I get tired from lugging all this equipment around?  Equipment maintenance, tending the horses, keeping an eye on the boss's stuff while he's drunk off his ass, make sure he's not interrupted while researching spells, etc.  Good retainers make an adventurer's life easier.

And then there's this last idea I've been kicking around.  Call it the Emergency Red Shirt Rule: Once per session a PC can automatically save their own sorry hide by sacrificing one of their retainers. A smart player will come up lots of ways for their retainers to stand between his PC and the reaper man, but with this rule even clueless newbies will be able to use retainers to hedge their bets. 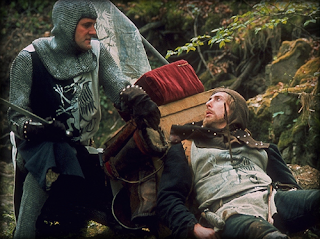