As far as I can tell the Armory was a game store that turned distributor at some point. In the 80’s they advertised regularly in Dragon, hawking Asgard miniatures imported from the UK and Armory brand dice. They often ran lists of stores that carried their wares, which was one of the few reliable ways to find a local shop back in the day. (That was one of the many ways pre-internet Dragon served as a lifeline to the larger gaming scene.) The Armory also published a few of their own gamebooks, three of which were designed specifically to give you something to do with your Armory brand thirty sided dice. I used to own all three books, but I sold them as part of 2001’s Operation: Make Some Space in the Game Room For a Crib. Recently I re-acquired the last and weirdest of the three published d30 books, The Thirty Sided Adventure and Other Tales. 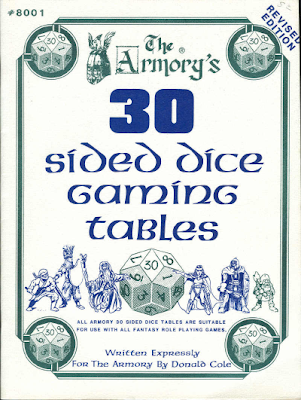 The first two d30 books weren’t bad. One oddity had all the interior illos be miniature sketches from the Asgard line, presumably to save on the art budget. I seem to recall that one of them was considerably more pedestrian than the other. My gut tells me it was Dan Cole’s 30 Sided Gaming Tables that was the weaker entry, but I can’t swear to it. Even so, I tried hard to get some use out of all three books. I think Cole’s tome had the d30 chart, for instance, that listed thirty different weapons so you could roll up a fighter’s starting proficiencies. I used that one for quite a few NPCs in my Bandit Kingdoms campaign. But the other two written by Bob Liddil had more mojo. I’m pretty sure it was Liddil’s The 30 Sided Character and Other Tales that contained a character quirk chart that I used on some of Baron Phostarius’ followers. That experiment resulted in my campaign’s first canonical lesbian when a female NPC ended up with “passionate for gypsy women”. 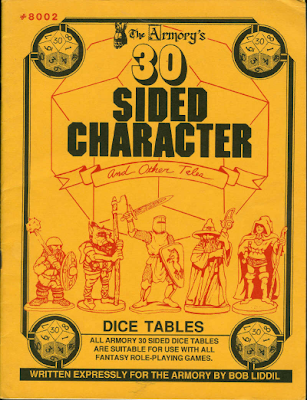 The Thirty Sided Adventure and Other Tales was part book o’ charts, part adventure module, and part campaign guide for Liddil’s goofball Strange Lands setting. Sometimes when I read the Strange Lands material I find it delightfully corny. Other times I find it lame as heck. (Maybe this is how normal gamers react to Arduin?) Even when I’m not digging the material, I still appreciate the fact that Liddil put himself into the material. Not everyone is going to want to adventure in a world where the sailors are all lycanthropes and the Grand Canyon is crawling with snake cultists, but I gotta give the guy credit for trying. And his chart Things Slipped Into Your Rucksack By Your Aunt Millie (Because She Loves You) is the direct ancestor of my Deck O’ Stuff. 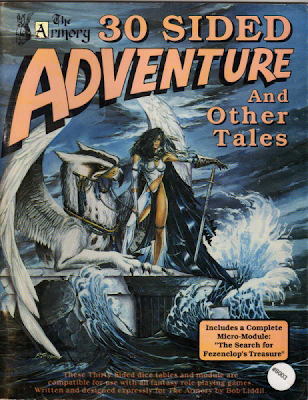 Last I checked these books still came up on eBay and Noble Knight every once in a while for not-completely-unreasonable prices. Oh, wait, I just checked Noble Knight and they want forty freakin' bucks for 30 Sided Adventure. Never mind. Liddil is selling a fourth installment in the d30 series online, with a sample page here.