get it while it's hot 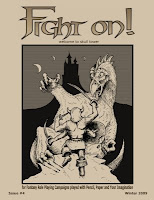 I'm probably just another reverberation in the echo chamber at this point, but in case you don't know Fight On! #4 is out. You will be hard-pressed to find a better value for your gaming buck in terms of sheer amount of usable stuff. Personally, I'm thrilled because my good buddy Pat illustrated a couple of monsters of mine, the Grisly Sphere and Wampler. The Grisly Sphere has got to be the creepiest homebrew critter I've ever made.

The Wampler isn't a very good monster. It's basically an intentionally lame vampire elf. But it has two (slightly) funny stories attached to it.

1) The monster is named after a local politician. When Mr. Wampler ran for office a couple years back the town was plastered with signage asking for you to elect Wampler. In my mind the name Wampler looks like a variant of wampyr a.k.a. vampire. So everytime we'd drive past a Wampler sign I would say to my wife "Beware the Wampler, it stalks in the night!" My first draft of the monster write-up even contained that line, but I eventually cut it for reasons that I don't recall now. (Note that my creation is not political satire in anyway. I don't know the guy from Adam.)

2) Space constraints forced the editor to cut the Wampler from issues #2 and #3. Getting my buddy Pat to draw the creep was a sneaky little plan to make sure Wampy got into issue four. I figured he wouldn't be able to use the illo without the creature. Normally I am incapable of the requisite craftiness required for these sorts of machinations, but this time I was able to actually devise and execute a cunning plan.