No, there is another

Not too long ago Jamie Mal offered the opinion that the original World of Greyhawk folio was the best setting TSR ever published for D&D. It probably came as a shock to no one that he thinks the first official setting for D&D was the best of the lot. Not that I really disagree. Personally, I’ve played the crap out of Greyhawk over the years, using it for nearly every edition of the game. In terms of combining artistry and utility Darlene’s sprawling depiction of the Flanaess is still one of the best game maps ever created. The only other setting I’ve used nearly as much would be Mystara, or as we called it back in the day, The Known World.

What strikes me about both settings is that they are not brilliant works of genius by any stretch. Instead, I would call them workmanlike. Greyhawk and Mystara are sufficient as the place to have your adventures, and that’s it. No big whoop. And I think that’s a great thing. They fill a need for folks who don’t want to make their own setting but who want a larger background, a context for their adventures, and nothing fancy. In this way Greyhawk, Mystara, and the Wilderlands show a direct descent from Robert Howard’s Hyboria. I love the Conan tales as much as the next guy but Howard wasn’t an artiste building an intricate world, he was a dude writing macho tales of sex and violence. The milieu around Conan was little more than an excuse for the Cimmerian to fight rapier-wielding pirates in one adventure and axe-swinging Vikings in the next.

So while I don’t disagree that Greyhawk was probably the best setting TSR published, I would qualify that as only from a practical DM’s point of view. In terms of sheer artistic power, I’d look elsewhere. Empire of the Petal Throne is an obvious contender here. Some will say that EPT doesn’t count because it technically isn’t D&D. All I can say in reply is that EPT obviously took OD&D and tweaked it to better fit a set of needs, just like every D&D ref who has ever written a houserule and just like every later edition of D&D. But like gin, I can only take Tekumel in small doses before it completely messes with my head. That’s why I’ve imported some hunks of the EPT into my World of Cinder homebrew setting. Now I can engage Tekumel as much or as little as I want, then back off and return to the orcs and elves and whatnot.

Some days I’m of the opinion that the best D&D setting TSR ever published is neither Greyhawk nor Tekumel. I’d give the gold medal to Minaria, the setting of Glen & Ken Rahman’s classic fantasy board game Divine Right. I’ve only played a handful of games of Divine Right and it’s been more than a decade since I’ve actually seen the inside of a copy. But the map continues to be one of the coolest I’ve ever seen. Click the image below to get a little taste of the awesomeness. 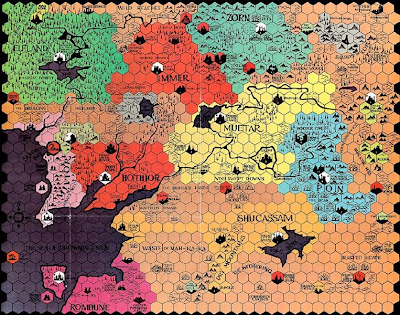 The various kingdoms are ruled by monarchs with names like Nualt the Dreamer, Archon of Mivior or Cemoii the Wanton, Queen of Shucassam. And the counter mix is full of hardy mercenary captains like Juulute Wolfheart and the Black Knight. The elves are Nazi bastards, the Gypsies are all half-elven refugees, and the ghouls have vulture-beaks. What’s not to love? And while the game itself was very sparse in fleshing all this stuff out, Glen Rahman wrote a couple dozen fabulous installments of “Minarian Legends” in the pages of Dragon magazine, right around issues 34 to 57 or so. Each legend is only three or four pages long, a size I find very easy to digest. 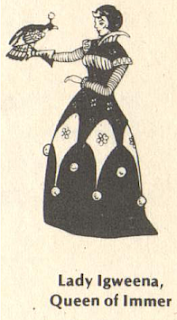 Two things really make the world of Divine Right a neat-o choice for setting D&D adventures. First of all, it is a pulpy fantasy world with just a hint of fairy tale creepiness. There’s no grand clash between good and evil, no Tolkienian angelic elves mucking up things, no epic plot. The game is about the struggle of nations, chock full of blood-soaked battlefields, alliances of convenience and backstabby betrayals.

And secondly, I sometimes think that the fact that the setting wasn’t created explicitly for D&D can be an advantage. One of the things that occasionally undercuts Greyhawk and Mystara for me is the close correspondence between the system and the setting. I know some folks think system should always support the setting and some days I feel the some way. But if you take that too seriously I think the game mechanics end up damaging the credibility of the game world. Or maybe I just prefer to engage the gaps between setting and system and when the two align closely I have no room for play. 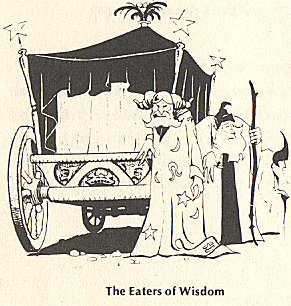 Putting together a Minaria campaign would be a pretty straightforward, though it’d require some work and more than a little cash. For rules I’d probably go with OD&D, 1st edition Advanced, or Holmes Basic. But lots of other stuff could work as well: Tunnels & Trolls, Rolemaster, HackMaster, C&C etc. You’d need a copy of the boardgame, which isn’t cheap whether you’re talking about the original TSR version or the fairly recent re-issue by Right Stuf. The Dragon magazine CD-Rom collection provides all the Minarian Legends articles, though if you don’t have that I’m pretty sure I’ve seen them floating around there somewhere. Scribd.com maybe? Any PDFs on the net are probably outlaw copies, unless the rights have reverted to Glen Rahman or something like that. This d20 Minarian adaptation looks like it might be helpful as well.

The main thing that would require a little work from baseline D&D would be a few of the races. Divine Right goblins aren’t puny little fartknockers, for instance, but rather are described as averaging “four to six cubits” in height (which means an average height of 8 feet or so, I think) and are almost as strong as trolls. Bugbears, maybe? One of the really cool advantages of such a project is that, by dint of Minaria’s boardgame origins, you already have everything you need to generate events at the campaign level: just play out a few turns of the game before you set the PCs loose. 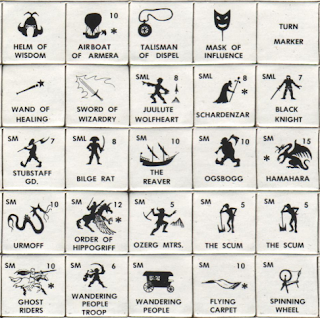