the hardest working die in showbusiness

My Purple Thirty Sider holds the distinction of being the only die in my collection responsible for the founding of a worldwide fraternal organization, but it is not the die I roll the most when running games. That distinction goes to Big Red: 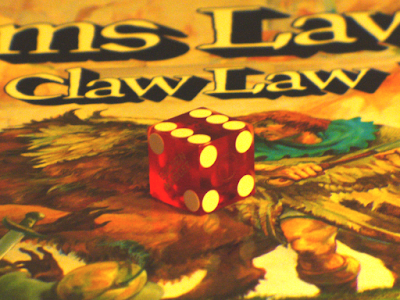 This die has been in my collection for so long that I can't quite remember where I got it. It's made for a casino, the Golden Nugget in particular, so I suspect my parents bought me a pair of casino sixers on their one trip to Vegas in the 80's.

Outside of to-hits and saves, nearly every roll I make when running Labyrinth Lord/OD&D/etc. is with this single six-sider. Searching for secret doors, listening or opening doors, and checking for wandering monsters are well known uses of 1d6 rolls. I also tend to roll number of monsters appearing, and damage with 1d6 even when the particular edition I'm running uses other dice for those tasks. Like Vegas, what happens behind the screen stays behind the screen, so the players never know that I've used the wrong dice. They probably wouldn't object anyway, since a lot of monsters that do d8 or more damage end up being slightly weaker.

More importantly, during standard dungeon operations I tend to envision nearly all situations that might need random input in terms of an X in 6 chance. Do the orcs in room 24 hear the fight in room 22? Are the 10' poles going to snap when the players use them to lever the big boulder out of place? Will the ogre fall for the PC's bullcrap story about needing to deliver a pizza to the evil overlord in 3 turns or less? Sometimes I make a snap judgment on these sorts of questions, but a lot of the time I envision them as a chance on a six sider and throw Big Red.

I didn't really start using Big Red until the last couple of years, and it's kinda weird why. Back when I had a pair of these dice they were just an oversized set of 2d6. They didn't fit comfortably in my hand, so they never got much play even when I ran 2d6-based systems like Traveller. Only by losing one member of the pair did I finally figure out what to do with the lone survivor. Now I have this big shiny candy-like die that I can find with no difficulty. When Big Red was half of a pair of dice I didn't even take them out of the bag.