Q: What color is a tirapheg? 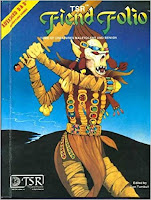 So I've been re-reading the Fiend Folio, as I am wont to do from time to time. And once again I was struck by how in the old monster write-ups you can easily tell whether the monster creator regularly used minis or not. You'll get what are effectively detailed painting instructions from the minis-users, whether a retail figure exists for the monster or not. People who use minis in their games a lot tend to think in color.

Then there's creatures like the tirapheg. Heavy on the kind of description you need to convey to players what the hell it looks like, but not much in the way of color info. The shape of the monster tends to be top priority in the imaginations of the non-minis set.

I guess you could read the descriptors of "naked and hairless" and "human-like" to imply that you should paint your tirapheg in normal human skintones. That strikes me as a super-creepy option. But the fact of the matter is that we don't know for sure. The original vision of the tirapheg could look more like one of these: 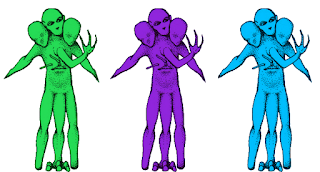 Of course, it is entirely possible that the tirapheg might appear in later monster books I haven't read and the updated write-ups include color info. Heck, there could even be an official prepainted plastic mini for all I know. That's not really the point of the post though. Rather, I want to suggest that when you write up a visual description for a new critter, consider including both the physical shape of the thing and a color guide as well. The color info will help even the Theatre of the Mind style DMs to describe the thing, while it also greatly benefits a lot of minis painters. 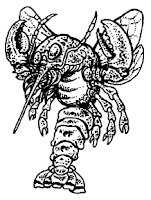 And don't worry about the fact that an official mini of your monster doesn't exist. Even a DM like me, who rarely uses figures and can't paint his way out of a paper bag, can do a little kitbashing if the situation call for it. It only takes a small plastic lobster from a zoo gift shop, the wings off of a plastic dragon fly, a toothpick, and a bit of paint to make a garbug, for example. Heck you could fake the wings with cardstock if you wanted. A tirapheg probably wouldn't be too hard to mock up out of Sculpey or you could hack together parts from a couple of Reaper sculpting dollies.