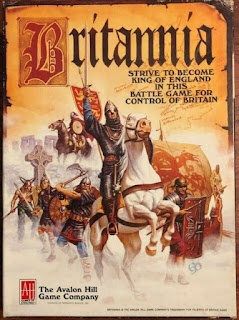 Britannia is one of my favorite 4-player board games. The map is the British Isles. One game covers the Romans to the Normans, with each turn playing out the movements of whole peoples into and out of history using very simple mechanics. Lots of fun and genuinely educational. And it spawned an array of similar games. I've player History of the World a few times, but none of the others. I'd love to try Maharaja, which applies the same concept to India. 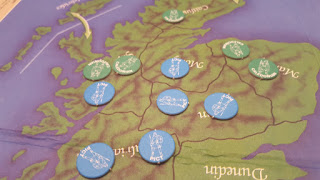 The designer of Britannia is Lewis Pulsipher, who is one of those people that doesn't always get the credit they deserves for their contributions to the early days of the gaming hobby. Not only does Pulsipher have several board game credits, but he was all over the early D&D scene. You can find multiple articles penned by him in Dragon, White Dwarf, Imagine, Different Worlds, and Adventure Gaming. I'm sure his work appears in other places that I am forgetting at the moment. He also has credits in the original Fiend Folio (a.k.a. the best monster book), supplying the world of AD&D with the bat (giant), the denzelian, the poltergeist, and the friggin' Elemental Princes of Evil! Surely inventing Cryonax, Prince of Evil Cold Creatures is worthy of entry into the D&D Hall of Fame. Just look at the guy!

Anyway, all this is a preamble to an idea I had for a new Britannia-style game. The game covers the entire pre-history of life on earth, as viewed through the lens of the Cthulhu mythos. Instead of factions consisting of Romans, Picts, Angles, Belgae, etc., they would be Elder Things, Flying Polyps, Mi-Go, etc., mixed in with the appearance of megafauna such as Inostrancevia, Tyrannosaurus, Smilodons, and such. The other gimmick would be that the map would change as the game unfolded.

Obviously, this would be easier to accomplish in a computerized version, but you could swap boards provided you had a clear system for annotating positions before each board swap and each map had analogous territories.