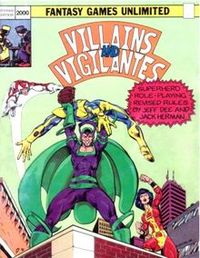 Villains and Vigilantes was one of the great superhero RPGs from the period before the release of official Marvel and DC games in '84 and '85 respectively. Written by Jack Herman and Jeff Dee and illustrated by the latter, V&V had a lot of good stuff going for it. Unlike it's #1 rival Champions, V&V used both level mechanics and random generation. As a kid I though that made the point-buy based Champions the better game. But nowadays I look back at the period where I played a lot of Champions and wonder what the hell I was thinking spending so much time fiddling with all that math when I could have just rolled up some weirdo and started playing. (The short answer is that I liked the company of the people I played with, which trumps a lot of other considerations for me.)

Anyhoo, you can buy a bunch of V&V at drivethru these days. I think Jeff Dee has continued to revise the system but under different titles. I recall he had out a rulebook called Living Legends ten or fifteen years ago and I think Mighty Protectors is a more recent incarnation of V&V. But I don't know much about either of those. Today I wanted to share a chart from the second edition back in the day. This chart can be used for randomly determining the level of anyone the PCs encounter:

Need to know the level of the supervillains opposing the party? Just throw 4d6 and cross reference with the highest level on the team. This chart could be used in a D&D-type game easily enough to generate NPC parties or things like that.

The rules note that to use this chart for thugs and henchmen divide the result by five and round up. (This could result in a situation where the master villain of the scenario is 1st level but their right hand goon is 2nd, 3rd, or 4th level. That could be a fun dynamic to see play out.) For civilians divide by ten and round up.

One other weird bit of trivia about V&V: although it would be super easy to begin character generation by throwing 3d6 five times for your PC's Strength, Endurance, Agility, Intelligence, and Charisma, the rules actually come with guidelines on how the GM should rate each of their players in this regard! I.e. the assumption was that you played a version of yourself in this game, only with superpowers. The only other game I know like that from back in the day is Timelords by Greg Porter. (Not to be confused with Time Lord, which was a licensed Doctor Who rpg.) I normally think of Greg Porter as the mind behind the delightfully schlocky Macho Women with Guns line, but he has a load of other rpg credits on top of that.