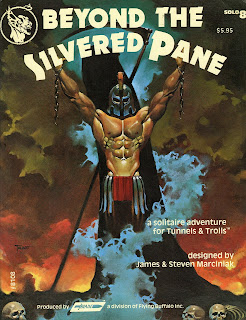 As I mentioned back in January, the main gaming I've been doing over the last year has been Tunnels & Trolls solos. Sitting around a table with folks has felt like a health hazard, while my entire job moving onto Zoom has reduced the appeal of online gaming. But I got my second dose of the magic juice today, so maybe I'll get back to a tabletop game sometime soon.

Meanwhile, I have killed a lot of characters in various T&T dungeons. Here are just some of the deaths that survive in my recent notes:

I've killed dozens more poor pitiful adventurers than just those listed. Very few have made it to second level before their untimely demise. Nelatu One-Hand up there is my only PC so far to achieve third level, although he lost his left hand to some very nasty monkeys prior to his unfortunate petrification.
Some things I have learned making all these T&T characters in batches and getting most of them killed: