Thanks to the Nameless Jedi for inspiring this post. Let's begin with a simple thought exercise. 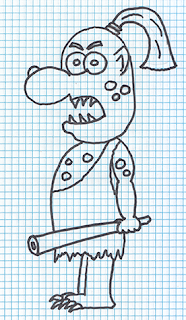 Now, before you click to read the rest of the post, imagine the color scheme you would use to turn my black-and-white illo into a full color jobbie. Do you have that image locked in? Then click away.

Here are three canonical color schemes for Orlando, or at least my best efforts to reproduce such color schemes. 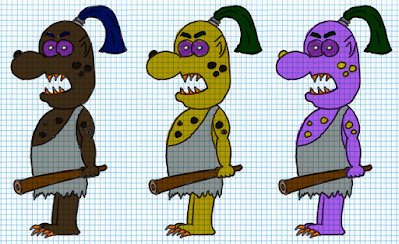 Did you imagine any of those? Or did you imagine an extra-large Caucasian type? Sort of a junior-sized hill giant? You're not alone in that. But here's what the original Monster Manual says about ogres:

Description: The hide of ogres varies from dull blackish-brown to dead yellow. Rare specimens are a sickly violet in color. Their warty bumps are often a different color--or at least darker than their hides. Hair is blackish-blue to dull dark green. Eyes are purple with white pupils. Teeth are black or orange, as are talons...

And let's talk about the warty bumps. How many illos of ogres have you seen with warty bumps? I search every black and white image labeled "ogre" in google before I decided to draw my own. Only three had warts at all. Two of them were watermarked and the third was too complex to easily color. So I drew Orlando up there. (Can you believe I have a published illo in an early issue of Fight On! magazine? The editor must have been desparate to fill the blank space.)

Have you every seen a warty ogre miniature? Heck, the illo that accompanies the quote above depcts a wart-free ogre, so I wouldn't be surprised if all miniature ogres are smooth-skinned.

Obviously, your ogres in your campaign can be have any configuration of colors (and warts) you want. I've used the ogre in Time Bandits as my baseline in more than one campaign. But I also have done the bog standard Neanderthal look. Ogre stats also make for good reskinnable goons. I've used the ogre statblock for Metaluna mutants, for example.