so here's some cool stuff

I was over at eBay for the first time in forever, slouching through the roleplaying section.  As usual I was bitching to myself about the sheer volume of D&D plastic figures clogging up the pages.  But that's when I noticed something.  I haven't been following WotC's minis and since I last looked they have produced some figures that might be of use to the non-dungeonpunk crowd.  Here are some of them.

I love giant mushrooms in dungeons and fairy forests.  They're not hard to fake on the tabletop (hint: champaign corks) and you can often find useable models at craft or garden stores, but I like the fact that WotC is branching out here beyond dudes what will hit you.

One of the great mysteries of the universe is that a treasure chest didn't appear on day one of the line.  Maybe because no one thought to hardwire "get the treasure" into the DDM rules?  Perhaps a dungeon door is also available and I haven't found it yet.  That would be sweet.

A dead guy and a pig farmer.  I may have to get that pig farmer even though I stopped using minis years ago.

Just a regular guy with a crossbow.  Perfect for henchweenies.

Dudes with light sources!  Though I'm not sure anyone with an actual flaming torch carries it as close to their face as the pointing guy.

Hey, some guys dealing with encumbrance!  Awesome!  Who trusted the goblin with the treasure, though?  The guy with the bag and the lantern man above should team up.  They look like they know what they're doing. 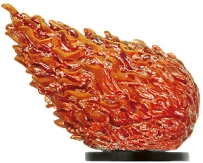 Hey, it's my old friend Fire Buddy!  He's all grown up now! 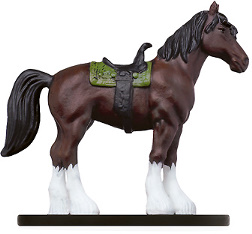 Totally serious questions: Does 4e have good rules for mounted combat?  If so, are they backwards compatible (i.e. worth ripping off)? 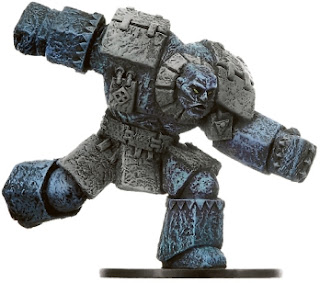 This is labeled a "Maug" but my first reaction to spotting this guy was "Holy crap!  It's that door-busting wrecker-robot that Russ drew for White Dwarf!"

Incidentally, if you want to track down any of these minis the file name for the pic should list both the figure name and the specific release it comes from.

A final question for folks who actually follow the D&D miniatures line: Have they come out with a wizard with a pointy hat yet?  Preferably with a long white or grey beard, but I'm open to other facial hair options.