A Surfeit of Lampreys, session 9

Hey, thanks for all the great responses to yesterday's beer-related inquiry. I got so many suggestions, I may have to do up a little chart or something.


For last night's game I decided to try to do a couple of things differently. First, we picked up pretty much where we left off the previous session. Normally I try to end all sessions with the players back in safe territory and then the game picks up 2 weeks later. But last session we ended the night after just concluding a vast slaughter in the hall of Sir David of Lee Roth. So we began this session with the looting of the slightly-burning hall.  Second, I wanted to try something a little trippier than usual, with sort of a cosmic psychedelic feel. 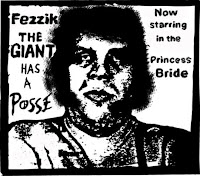 The PCs present at the beginning of the session are Alvis the Pardoner, Philip the Creature and Fezzik.  (Wheels's PC may not actually be named Fezzik, but the dude is a changeling with the tell of being big so that's who I think of him as.)  So as things begin I rule that the paladin is distracted mourning a little for his sidekick who died in the big fight, the Welsh brothers are distracted because the brother who is a vampire is feeding on the night-quite-dead and the other PCs are searching elsewhere in the bailey-house.  These three PCs happen to be the guys who stumble upon the private chambers of Adonis Tigerblood, Vatican Assassin Warlock.  There, sitting on a reading desk, they find a big ol' blue book with a weird cover: 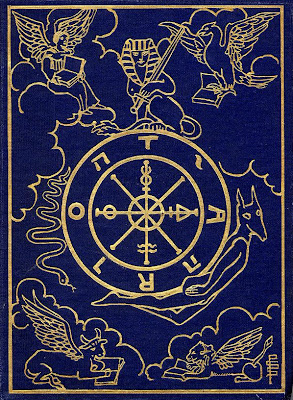