Time to crack open that issue of Dragon (number 69) and see what's inside... 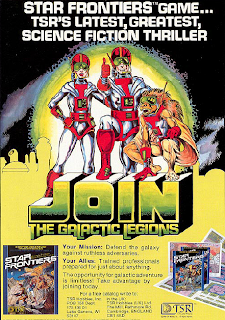 ...and we've gone off the rails right from the inside cover ad.  Nice.  I remember as a kid being disappointed that the setting in Star Frontiers did not include a kick-ass organization called the Galactic Legions.  Here's an opportunity to remedy that.  Imagine the Galactic Legions as sort of a Star Fleet type good guy org.  What are they doing on our D&D planet?  Could the party befriend some scouts surveying their homeworld?  Could the PC party be composed of crash-landed Legionaires?  Or maybe if like me you still have that cool Star Frontiers city map, part of your campaign world is colonized by a bunch of sci-fi dudes.

I find the domed and towered sci-fi city silhouetted behind the legionaires very evocative, so let's go with that last option.  One of the Legions identified a resource-rich but largely uninhabited region to build a futuristic colony.  That could be what sets Circe Doombringer on a rampage.  She opposes the offworlders but most regular folk like the economic advatages of interstellar trade, so she ends up fighting her own people with armies of skeletons and orcs.  (FYI In Part 1 a commenter by the name of Rick offered some thoughts on a motive for Circe that could work just as well.)

Obviously we'd need stats for at least some laser guns and those cool white spacesuits (I'm thinking protects as platemail, encumbers like leather).  And a Yazirian character class.  And don't forget to sprinkle in some robots and psionics.  Starting, as I suggested yesterday, with Labyrinth Lord as a base makes adding this stuff super-simple.  Most of this sci-fi stuff can be adapted from Mutant Future. 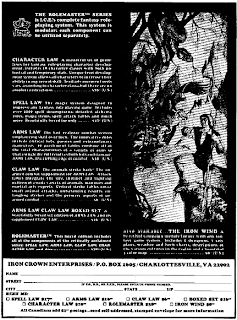 Page 1 of the magazine is an old Rolemaster ad.  I'm working with screengrabs of the Dragon Archive CD-ROMS (still one of the hobby's best values ever, by the way) so some of the art I'm going to share is all munged up.  Anyway, let's look at four elements of this ad that I found interesting.

This blurb for Claw Law is a little hard to read.  What I'm digging on here is the idea of 'unbalancing results' and 'entangling strikes'.  In my opinion people don't fall down enough in baseline D&D combat.  And getting your weapons tangled up with the foe's weapons or someone's shield sounds interesting as well.  My first thought is to write up a short table of stumbling/falling over/weapon boogered up effects and figure out a way to get it into play.  Maybe "Anytime a natural 13 is rolled, go to the General Fracas Chart.  If your net attack roll is a hit, the Fracas result affects your target.  If it's a miss, you are affected instead."
Obviously there's no setting material in these thoughts, but house rules also help flavor an individual campaign.

The Iron Wind is a very early ICE product and I don't have much more information than that blurb says.  But I do know this: that is a cool mofo name for some badguys.  Maybe that's the name of Circe Doomsinger's organization and the first half of the campaign is a cold war espionage thing against the assassins and traitors of the Iron Wind. 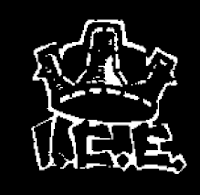 The (iron) Crown of the Ice Empress really ought to be one of the major magic items of the campaign.  Maybe its stolen by agents of the Iron Wind and the PCs have to retrieve before they use it to plunge the Duchy into eternal winter.  By the way I'm sure ICE is named after the iron crown of Morgoth from Tolkien, but there really is an Iron Crown of Lombardy.

Finally, there's this dude.  It's a little hard to see but it's basically a youngish-looking fellow with the same haircut as Rather Dashing.  A hawk is alighting on his arm as a snake looks on from up a tree.  Who is this young hawksman?  Is that snake a lurking danger or another pal like his bird buddy?  I think I'll call him Danlak o' the Falcon.  He's got some sort of beastmaster/druidic thing going, but with a more civilized fairy-tale type gloss to it.  Prince of Birds and Beasts is one of his titles.  The craggy castle in the background (which is almost invisible in this terrible pic) is his home.  Prince Danlak could be a valuable ally for the PCs, what with his ability to know everything the birds in his land know.  But maybe he's a secret member of the Iron Wind.  He's probably got some pet bears that could totally maul the party if they find out and try to take him out with a direct attack.