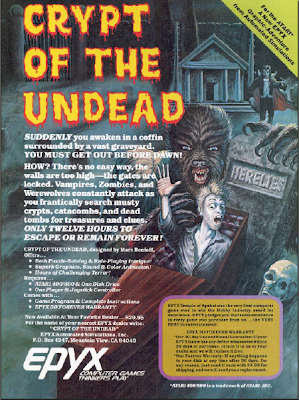 Time to continue plundering Dragon #69 to build a campaign from whatever we find inside. Today we're looking at this totally awesome ad for an old Atari computer game. Speaking of Atari personal computers, have you seen this new Atari style USB keyboard? I never owned an Atari PC but that looks sweet as hell.

FACT #1: If your campaign does not already have a haunted cemetery full of draculas, wolfmen and other unsavories then you either need to add one ASAP or come up with a darn good explanation why your world does not include such things.

But why is this graveyard haunted?  Is every cemetery in the campaign world a hang-out spot for the undead?  That's my assumption in the World of Cinder.  Graveyards there are basically segregated housing for the living impaired.  Or is there something particular jacked up about this one bone zone?  Maybe some sort of evil artifact or lingering curse powers the undead-ification and the PCs can do something about all these spooky monsters.

I remember reading somewhere (an old MERP module or maybe right there in Tolkien) that the whole problem with the Barrow Wights was that the Necromancer was waking them up.  Perhaps an agent of the the Iron Wind (as mentioned in part 2) who was a student of Circe Doombringer (part 1) is running around stirring up the dead as a sort of macabre fifth column.

FACT #2: Starting a game by waking up in a coffin is totally rad.

Seriously, can you think of a better way to deliver an in media res upside the players' heads than "SUDDENLY you awaken in a coffin surrounded by a vast graveyard"?  Forget scoring goldpieces, just get me the crap outta here!

Perhaps all the PCs in the campaign are folks from the Real World who wake up in coffins!  It would be the fantasy equivalent of starting the campaign by getting out of cryofreeze like in The Morrow Project or "An Alternate Beginning Sequence for Metamorphosis Alpha" (Guy W. McLimore, Jr., Dragon #6).  Players could even run D&D-ified versions of themselves in the vein of the D&D cartoon or Joel Rosenberg's Guardians of the Flame series.  The latter, incidentally, is one of the few fantasy novel franchises of which I was ever able to get through more than one book.  The rape sequence in book 2 or 3 put me off the whole thing, though.

Getting killed by a kobold while playing yourself would be a bummer.  But you'd also get the opportunity to try to figure out what character class best suits you.  Unless like Mark Barrowcliffe, the author of The Elfish Gene, you figured that out when you were a kid.  Mr. Barrowcliffe decided as a lad that he was obviously a druid.  I never went to the Mazes & Monsters-esque level of actually acting out some of these fantasies the way he did, but I was convinced at one point that I would be a kickass wizard if only magic was real.  By the way The Elfish Gene has some pretty neat stuff about the early British D&D scene, if you can get over the fact that the author seems to despise anyone who might be reading this post.

So this post is getting rambly.  To get back on track, let's run with the idea that every PC in the campaign is from Earth Prime (or whatever) and enters play by waking up in a coffin, tomb, open grave, etc.  That establishes a nice little overarching mystery: What the crap is going on?  Were those wacky medieval theologians right about the existence of Purgatory and that realm just happens to look like a cheesy 80's fantasy movie?  Are the jerks behind Riverworld also at work here?  Did all the PCs go into some sort of capsule-less cryofreeze only to wake up in the distant and weird future?  Obviously the whole campaign doesn't have to center around this mystery, but it certainly adds a little flavor.

So next installment of this series we will finally get to the first article in the mag: "Runes".