A few years back one of the old school bloggers suggested adopting the brawling charts from Boot Hill to resolve hand-to-hand fighting in D&D.  Was that over at Grognardia?  I can't quite recall and I don't have a link bookmarked.  Anyway, I think that's a pretty decent idea. [UPDATE: It was at the Greyhawk Grognard, actually.] The BH brawling charts have lotsa fun results on them.  Another place you can find good random punching and grappling charts is 2nd edition AD&D.

There are a few other Boot Hill mechanics that I think could be used in a D&D game.  The section titled Professional Gamblers could be used to resolve tavern card games.  Personally I'd give Gambler Ratings to all Thief characters.  The Tracking Charts could be used for following people across the wilderness, something that many early editions  of D&D don't handle at all or else only the Rangers get rules for.

The Miscellaneous Characters Chart, which gives stat ranges for stock NPCs and the Fastest Guns That Ever Lived Chart can't be directly used in D&D, but they are suggestive to me of similar charts that could be useful to DMs.  Imagine having a handy chart giving the stats of the top twenty wizards or clerics in your campaign and where they can be found.  That would be very handy when your players suddenly decide they need a specific high level spell cast on their behalf.  A stock characters chart would give you a rough idea of how normal folks work in your milieu.  Do all blacksmiths have high Str?  Do town guards tend to have levels?  Having some generalized answers to these questions could be helpful when the PCs visit places you haven't completely fleshed out.

Here's the part of Boot Hill that got me thinking about this topic.  I think the Boot Hill Wound Chart (which in modern parlance would be called a Hit Location Table) could be adapted as a pretty reasonable crit chart.  In my campaign currently when the players roll a natural 20 I usually rule that the enemy is killed outright, but I don't have any mechanism for when the baddies get a similar to-hit result.  Here's my attempt to rectify that.  Click for a more legible version. 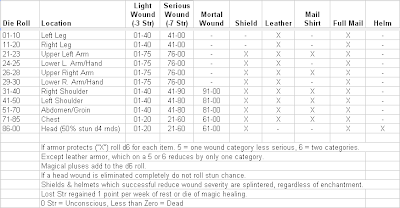 Extrapolating from Boot Hill, a light wound to your sword arm is worth -5 to-hit and a heavy wound -10.  A light wound to a leg or a serious wound anywhere halves your movement, while a serious leg wound slows you down to half speed and you can't run.  I'll have to think about the effect of various wounds on spellcasting.

I split the arm hits into upper and lower categories to better differentiate short-sleeved Mail Shirts and full-length-plus-chain-mitten Full Mail.  The shirts are a new introduction into the campaign.  I'm thinking that anyone may wear Chain Shirts but only fighter types have the training and discipline to put up with wearing the full suit on lengthy adventures.  The shirts will be Ac4.

Incidentally, using this Boot Hill chart only for crits to PCs instead of all hits exemplifies two beliefs of mine regarding hit location charts.  1) No one cares much where a hit lands unless it comes with some sort of mechanical effect and therefore hit location is best when folded into the crit system.  2) Most of the time the people at the table only care about how mangled the PC are.  For the badguys the binary alive/dead works fine.  That's why I let them just stone kill the badguys when a 20 is rolled.