Today I'm going to start a new series of blog posts.  This is an experiment of sorts, so maybe it won't work out as well as I think it will.  But I'm going to try anyway.  The basic idea is simple: 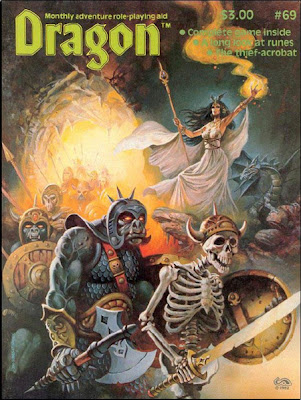 Today we're going to start with the cover.  Clearly the main antagonist of the campaign is that sorceress calling up an evil army.  Taking a cue from the character creation example in the '81 Moldvay rules, we'll call her Circe Doombringer.  Statting her up should be a snap.  6 rolls of 3d6 produce Str 11, Int 7, Wis 16, Dex 12, Con 10, Cha 8.  I'd probably swap Int and Wis, since she's obviously a magic-user type.  Her good looks might lead some to think Circe needs a higher Charisma score, but I think I'll leave it at eight and assume she has a terrible personality.  That's why she uses orcs and skeletons in her armies rather than people.  People require social skills to manage, orcs just cower and obey with a little magical bullying.

What level to assign to Circe is mainly a matter of how long you plan for your campaign to run and whether she needs to be a threat for the whole thing.  With skeletons in her army, I think she's probably needs to be at least the minimum level to cast animate dead, which in LL is 9th.  A tower and d6 apprentices of levels 1-3, available at 11th level, would be useful for her master villain status, so let's call her an MU 11.  One of those 3rd level apprentices could make a useful foe for some early adventures in the campaign.

From the picture it looks like Ms. Doombringer owns at least two magic items.  The staff she carries should probably be a Staff of Power or Staff of Wizardry, since she's the main villain of the campaign and all.  We'll call her winged crown the Dragon Crown of [blank], where I'm hoping to fill in the blank with something from later in the magazine.  I don't know yet if that will work or not, as I purposefully did not reread the issue to make this exercise as spontaneous as possible.  What I do know is that one of the powers of the Dragon Crown is to enthrall dragons.  That's why she has a pet dragon on the cover.

Two questions about that dragon.  What the heck color is it?  I think it's actually blue but I keep wanting to call it black.  More importantly, how big is it?  When I got this issue as a kid I assumed it was titanic but way in the background, but the way it's foreclaws are resting on that rock suggests that maybe it is tiny and standing right next to Circe.  Either answer is fine here, but it affects what the PCs think about Circe if they find out she commands Ragramok the Megadragon, the legendary uberbeast that destroyed the city Pha-Zool.  Knowing that she pals around with Ragramok the Runt, least of the litter of the Great Dracomatrona, means something else entirely.  One Ragramok is all fury and destruction, while the other is a master of dragonish guile.

Switching gears entirely, you know what I've always found weird about this picture?  The way the orcs and skeletons are all mixed together, as if they match side-by-side.  That should mean something.  Maybe orcs are natives of the netherworld in your campaign.  And/or skeletons aren't mindless undead robots.  Perhaps they can think and talked because they are cursed souls who can only return to the quietude of death when properly released from their bony prison.  They obey Circe Doombringer not out of magical compulsion, but because she knows the secret magic that can release them from this horrible state.  What if the PCs found out this information?  Would they still be able to kill masses of skeletons, knowing their souls remain trapped inside those shattered, useless bones, perhaps for all eternity?

Finally, look at the lower right corner of the cover.  That's the signature of artist Clyde Caldwell.  If you've been playing D&D or reading fantasy novels for a while, you've probably seem a gazillion pieces by him, mostly involving various degrees of cheesecakery.  Anyway, we can steal his mark, too.  Make it the Rune of Circe.  Perhaps it turns up as the mysterious signature on the bad guy correspondence the party discovers early in the campaign.  Or maybe it's a Glyph of Warding type trap that zaps the PCs with some nasty effect, like maybe level drain.  Stumbling across a few of those before the final confrontation ought to get the players good and mad at the villain. 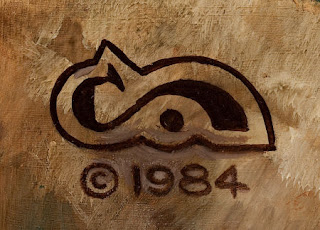 Next installment I'll actually open the magazine and we'll see what ideas fall out.