Saikaido: Island Between the Winds

So remember that google map of Kyushu island I posted a while back? Rob Conley very kindly overlaid a couple of standard Judges Guild hexgrids onto it and emailed me the results. I then took that and divided the map up into 'subsectors': 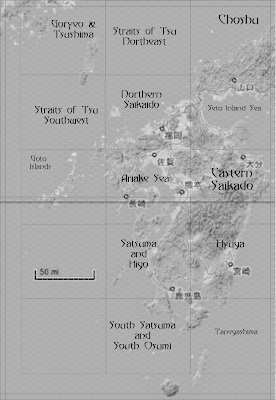 The names for the subsectors are just working titles at the moment.

The subsector size was determined by Grim's Blank Hex Sheet. My plan is to map and key one subsector at a time instead of trying to lay out a whole JG regional map at one go. For those times when I want to zoom in further than the 1 hex = 5 miles scale I plan to use either the Judges Guild campaign hexagon system map if I need to zoom in on just one hex or one of Lord Kilgore's maps if I need multiple adjacent hexagons.

My plan is to start in the northeast corner with Choshu. Since that's part of Honshu, the biggest of the Japanese islands and home to the imperial court, I plan on making that into starting area for new PCs. Sort of an Basic D&D region for Oriental Adventures, targeted specifically at character levels 1 to 3. Once you leave that map all the normal non-scaled hazards of sandbox play would kick in.

I'm still musing over the rules. On the one hand, this campaign concept began as "what if I actually did something with Oriental Adventures?" So my first inclination is to run those rules straight. On the other hand, some of those rules are a big pain in the ass. I'm thinking particularly of the extra little fiddly bits of chargen, such as generating a family, selecting proficiencies and buying equipment when both the money and the pricelists are totally different. Mike D's Ruins & Ronin is an obvious alternative, but I actually like all the different crazy class and race options in OA, as well as the spells, the rules for honor and families, and the charming if broken martial arts system.

Maybe the correct solution is to hack the OA rules to make them more friendly for newbies who just want to sit down ad roll up a character. In particular:

The real issue as far as the rules probably comes down to figuring out which is easier: starting with Ruins & Ronin and adding OA-like elements or starting with OA and adjusting to taste.