Saves in OD&D by class

The Y-axis (up and down) is the target number needed (or higher) to save. The X-axis (left to right) is the level of the character. 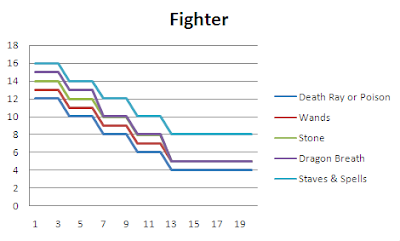 Most saves improve by 10% at each critical level (4th, 7th, 10th, and 13th for fighters) but a few saves improve by 15% at these junctures. In the case of the fighter Dragon Breath improves by +3 on two places on the progression, which is why it eventually ends up at a 5 or better at 13th level, just like wands. Observation: to pimp over a fighter make the character save versus Staves & Spells, to give him an easy save go with Death Ray or Poison. 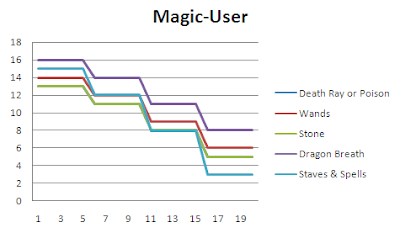 Starting saves for M-U's suck donkey balls like everyone else but they stay sucky for a long time owing to the improvements not coming until levels 6, 11, and 16. But a few +3 improvements in the chart allow high level magic-users to end up vaguely comparable with the other members of the party. Staves & Spells is a unique case on the OD&D charts. Magic-users start out with a pisspoor 15+ to save, but at 6th they get a +3 bonus. Then at 11th they get +4 and at 16th level they get a whopping +5! That means the mightiest of M-U's only need a 3 or better to save vs. Staves & Spells. My uncle used to always say "You can't kid a kidder." I guess "You can't magic a mage" is equally valid.

Per Supplement I: Greyhawk the M-U chart is also used for Thieves. 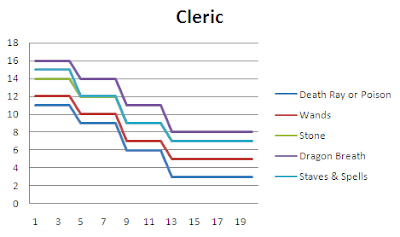 Like M-U's, Clerics aren't very good at saving versus dragon breath. Must be why those guys always try to send the lone knight to slay all those wyrms. Staves & Spells, Dragon Breath, and Death Ray or Poison all get two +3 pushes, but the Staves & Spells goodness comes early in the cleric's career while the other two are delayed until later. I'm not sure what that means.