I don't have enough time right now for a lengthy update. 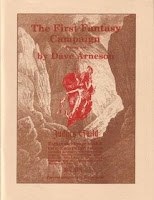 After a month-long hiatus my World of Cinder campaign resumed last night. I feel kinda lame about the fact that it took Dave Arneson passing away to finally get me to run the Blackmoor dungeons from The First Fantasy Campaign, but I'm glad I finally did it. The party (Carl, Christy and Squirrel) had fun exploring the mostly ad-libbed Elvish renfaire outside the castle.

Arneson's notes for the dungeon are extremely sparse. Most rooms are listed something like this:

That meant a lot of making stuff up on the fly based upon a few stats and a sketchy map. I live for crap like that. The party did a good job of foiling a poisoned chest trap with ropes and ingenuity when the thief's detect-o trap-o failed. The six corpses in the room strongly suggested the presence of a trap despite the roll.

I had intended for the mysterious appearance of Blackmoor Castles and Environs to be a one-off affair, but at the end of the night the players were itching to go back in. They even bought extra stakes and whatnot to deal with the vampires lurking reputedly about the joint. So I think the Blackmoor dungeons are here to stay. At least until a bad run-in with the vampires sends the group scurrying back to Stonehell.

Speaking of which, with only a small section of level one of Blackmoor under their belt the players noticed it was a much less cramped environment than Stonehell. The relatively high density of stuff in Stonehell is about the only criticsm I could level at that fine dungeon. It feels a little claustrophobic at times, which isn't necessarily a bad thing. I certainly don't want to discourage Amityville Mike from continuing to strive to pack every ounce of awesome he can into his excellent creation. Still, it was interesting to see the the players pick up on this issue.