Man, do I regret not blogging over the weekend. Now I have to try to remember all the cool gaming stuff that happened. Despite only drinking one gin-n-tonic the whole weekend, I still have that post-con hangover thing going on this morning. You know what I mean? Back when I was a bachelor and could get away with it I would take the day after the con off just to rest and recuperate.

Friday night's Encounter Critical game was a blast. I had eight players, more than I've ever had at an EC game. It was an interesting mix of people. Two players, Max Davenport and rogue attorney Chris Tichenor, are guys I know primarily from the internet. Two others, Joe and Marc, are locals that I've gamed with many times before. Max and Chris showed up with their own PCs: Zerok, a mad scientist bionic planetary ape modeled after this guy, and Bizarro #38, a mutant frankenstein with a black hole metal club, photosynthetic skin, and an evil talking magical birthmark on his left hand. Playing the role of the birthmark I kept trying to warn Bizarro #38 that Murderfrog was not to be trusted, but he just wouldn't heed my warning.

The other fours guys, as near I was able to gather, were some 40K players who had no friggin' idea what they were getting into. To their credit, they adapted pretty quickly to the fact that EC is basically the Schroedinger's Cat of roleplaying games, where the rules are in a quantum indeterminate state (alive/dead/phasic). Of course most normal players will react well if you hand them a charsheet with a skill like 'Murder' listed right on it. Long John Silverback, the ape pirate, was all over that one. And the player with the psi witch improvised several good psionic effects. My favorite was encasing an explosion of knock-out gas in a telekinetic force bubble. Of course when he later released the hold on the gas it knocked the whole party out anyway, but it was for a good cause, as it also took out a jungle flower monster straight out of Little Shop of Horrors. Fortunately for the party some of them woke up before the monster did. 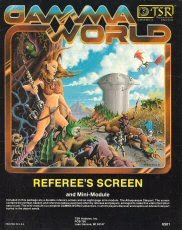 The adventure was an Encounter Critical adaptation of the Gamma World mini-module that came with old 1st edition GM screen. Man, dig that classic Erol Otus cover. The adventure comes in three parts. Part 1 involves finding a starport buried in the desert sands. Power is off at the joint when the PCs arrive, so it's a basical sci-fantasy dungeon crawl with lurking mutant menaces (snakemen, sand sharks, giant insects, the aforementioned killer potted plant, and etc.) and vaguely useful techno-treasures. The party managed to get the emergency power up and running, which allowed them to communicate with some of the robots in the complex. They then proceeded to phase two of the adventure, taking an automated shuttle trip into outer space. The main threats here are self-inflicted. The players did not seem to realize that every attempt to manipulated the ship controls could spell their doom. After all, something as simple as accidentally switching off the autopilot would have vectored them off into the endless voids of space.

The other big spaceship hazard was the effect of escape velocity-plus forces on the human(oid) body. Six of the players got wise to the fact that maybe they should strap themselves into the big comfy-looking acceleration couches. The other two hung out in the cocktail lounge even as klaxons were sounding and alarm lights flashing. Even the robo-barkeep putting away all the breakables didn't clue them in. Taking 2d6 damage per round from extreme G forces didn't quite seem to get the message through that they were in danger! One of the two intrepid barflies eventually saved himself by pulling the lever that activated the airbag-like emergency acceleration couch, but not before Murderfrog was reduced to a reddish amphibian paste. That was the only PC casualty of the night, not done in by mutated horrors or rogue robots but by failure to give proper respect to the laws of physics.

The final section of the adventure takes place on an abandoned space station haunted by Canopan Plague Zombies and a few mummies I threw in just 'cause I could. Early into this section of the adventure Zerok found a small sample of Canopan plague goo sans zombie and decided to taste it, giving him a slow-burning case of the zombie plagues. When they later encountered the first of the plague zombies and Zerok understood his eventual fate, he set up an alchemy lab in the starport lounge. Using med's stolen from the starport pharmacy, Romulan ale, various monster bits, and whatever other ingredients he could lay his hands on, Zerok eventually developed an antidote. Meanwhile the others were busy fighting plague zombies. Each hit by the zombies had a chance of infecting them, and every time the PCs splattered a zombie they stood a chance of infection as well. But the dice favored the PCs and no new cases of the plague were reported to the CDC.

After much mucking about in his makeshift lab, Zerok drank his antidote. I told him he was cured by means of vomiting up a stomach full of frothy brown zombie slime. Max one-upped me by noting that his cyborg head was entirely mechanical, so to purge he'd have to unscrew it and puke out of his gaping neck-hole. I'm still kind grossed out by the mental image of a headless gorilla vomiting.

When the party arrived at the station the robo-intercom announced that the shuttle would be returning planetside in two hours. They burned through those two hours pretty quickly, between looting boutiques and fighting zombies. As they hussled towards the spacedock they saw a big glowy techno-pyramid shimmer into view, all TARDIS-like, right up against another docking ring. This triggered a bit of debate between returning home via the shuttle or seeking new adventures in the mysterious pyramid, and then some tense negotiations with a half dozen shotgun-toting space orcs seeking to debark from the pyramid. The call to adventure won the day (huzzah!) and the party agreed to swap rides with the orcs. Thus the seven surviving PCs were whisked away on strange new adventures and the space orcs exploded when the autopilot winked out during the landing back at the starport.