One of the vendors at Winter War last weekend was Far Future Enterprises, the publishing company of Marc Miller, Traveller's dark lord. Mr. Miller was selling a whole host of reprints, his CD-ROM collections and a few original items still left over from the heady days of GDW. When I spotted a copy of Adventure 4: Leviathan I knew I had to have it. That's been my favorite GDW-published Trav adventure for a long time, as it basically takes the "seek out new lifeforms" ethos of Star Trek and puts it through a Traveller lens. You have a big spaceship (at least in old Trav terms) with a crew of sixty people wandering an unexplored subsector trying to meet new civilizations and economically exploit them. Good stuff.

I bought another copy because I only have Leviathan in the big landscaped-sized reprint volumes. I love having all that stuff bundled together, but in actual play its a bit unwieldy. Also, the original version uses red spot color on the subsector maps and the deckplan grids. The deckplans are a lot easier to read with the additional color.

Mr. Miller was selling Leviathan and similar book for five bucks each, with a three for ten dollars deal. Since my Trav collection is light on Journal issues, I picked up the first two "Best of" volumes. The Journal of the Traveller's Aid Society was one of the best magazines ever put out in the hobby, and probably the single best mag that covered just one game. A far amount of material in early JTAS issues later wormed its way into main Trav books, but you can still dig up neat-o stuff in 'em. Take, for example, this crazy ass chart from an article about robots: 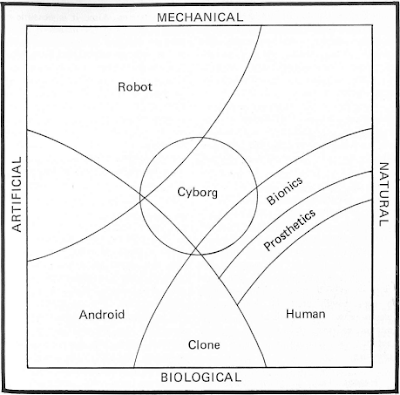 It is important to remember that rarely will a category occupy only a point on the table; many humans are completely natural, but the addition of fillings in teeth, eyeglasses, replacement joints, or artificial nails prompts some shading into the artificial range. Similarly, surgical replacement of organs with cloned organs dictates shading from the purely natural to toward the artificial.

The rest of the article is a pretty dry article on building robots out of things like a Type II chassis and a TL14 brain and other technominutae. Really, I think the robot rules is one of the few places where Star Frontiers actually improved upon Traveller. I just can't get enthused about most Trav robot rules I've seen. There was an old Dragon article that I liked, but I can't recall the issue offhand.

Look back up at that chart for a second. You notice several blank areas? I can't live with a chart like that, so I added some more labels: 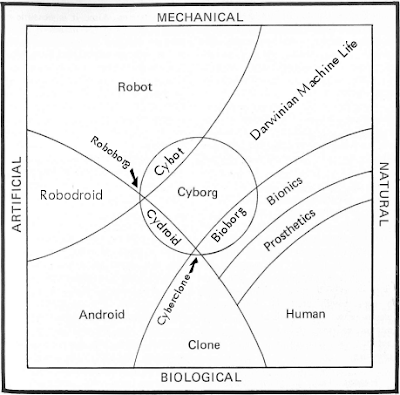 Honestly, I can't really tell you the difference between a Bioborg or a Cyborg, or what the heck a Roboborg is supposed to be. I just can't stand those spots being left undefined. Why draw the chart like that if you're going to do a half-assed job labeling it? A cyberclone would be a clone that enhanced beyond the baseline with cybernetics, I guess. By Darwinian Machine Life I mean mechanical forms that evolved naturally, like the Transformers before they found out their home planet was God.