Welcome to the dungeon, baby!

Today's post is inspired by Patrick over at Ode to Black Dougal. He's going over the dungeon-building device in Moldvay's Basic Rules and I can't wait to see how his dungeon develops.

Like Patrick, I first studied the art of dungeon design at the feet of Tom Moldvay and Moldvay Basic is one of the places I go back to when starting such an undertaking. . But the other big influence early on was Gygax. Module B2 The Keep on the Borderlands stands right alongside Moldvay's Haunted Keep in my personal dungeon mythology. And a year or so after leaping into this crazy hobby I got my Dungeon Master's Guide, which contains my alltime favorite mechanical toy, Appendix A: Random Dungeon Generation.

Some people dig random dungeons and some people don't and I totally respect the opinions of those who don't. Me, I like throwing a bunch of dice, looking at some crazy charts, and trying to impose some rhyme (and maybe a little reason) to the results. Some of my best dungeons grew out of adding just a little vision and personality to an otherwise nonsensical set of random results.

One of the best parts of Appendix A is this neat little illo: 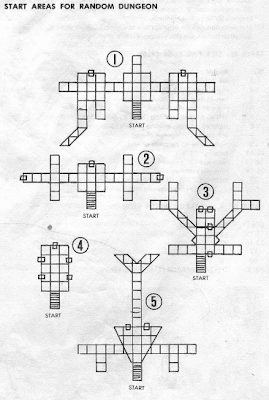 Man, I couldn't tell you the number of dungeons I've seen where the starting room had one or two avenues of exploration. Weak sauce. A good dungeon is all about presenting the party with a bunch of tough choices, many of which have to be decided upon with insufficient information. Gygax's starting areas provide the party with between five and nine possible routes deeper into underworld. This arrangement gets the party thinking, discussing, planning, maybe even arguing without so much as a single bit of dungeon dressing or a single monster yet in play.