Most of the pics I snapped at Winter War didn't turn out very well, but here's a couple of cool shots.

In the main room with the dealers and most of the minis and roleplaying games some guys had this rad to the max 55mm World War II game going. Dig it: 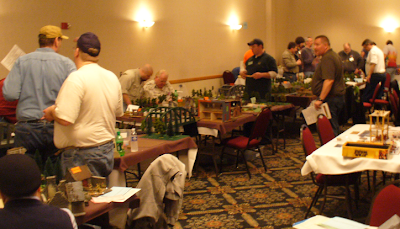 Every table in that shot is part of the same game, except for the one with the white cloth on it to the right. They arranged five tables in a column, with a steel girder bridge between each table. Below is the same set-up from another angle, where I'm standing at one end of the battlefield. The other side of the battle ends just in front of the dealer table at the far wall. 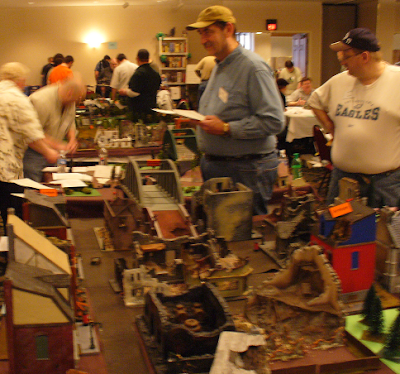 I took eight shots of my Encounter Critical game. This is the only one that didn't turn out terrible: 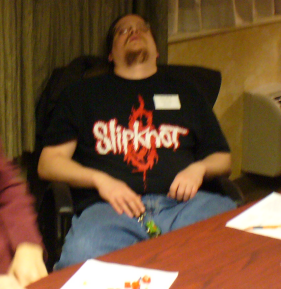 Joe felt awful that he nodded off halfway through my game and kept trying to apologize the rest of the con. Poor guy, he missed abotu half the game and then felt guilty about it!

I found out later why he was so dang tired. He worked the late shift at his job, then immediately went to help Armored Gopher set up their con booth, then he showed up for my game. Dude had been up thirty hours by the time he started playing.

These last two aren't photos, but I thought you might like to see them anyway. I own a Savage Worlds customizable GM screen, which I love loading up with homemade stuff. When the players showed up to my Big Stupid Dungeon Party, this is what was facing them: 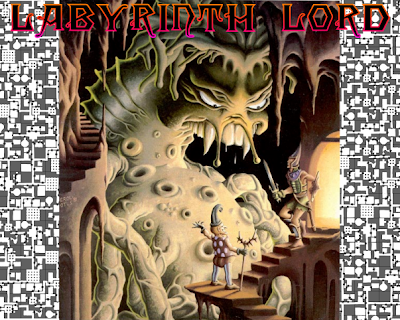 That's the Erol Otus cover art for Dragon #55 bordered by S. John Ross's Tombs of Rivulax hand-drawn dungeon geomorph font. I'm pretty proud of the color scheme I used on the custom Labyrinth Lord logo. That was actually a dry run for the logo I made for the Erol Otus art contest. The font for the logo is called Angular. I slightly tweaked it for the art contest logo, but here it's unmodified.

The two side panels of the screen each used four pieces of classic Otus art also flanked by the Tombs of Rivulax. For some reason I can only find one of the side panels on my hard drive. 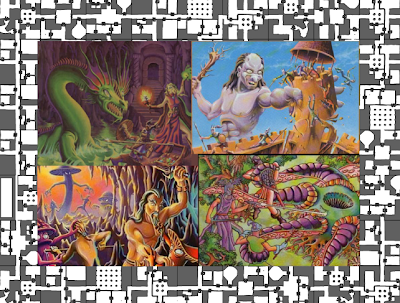 Does anybody have a big, clean scan of the cover art for The Expedition to the Barrier Peaks? That's the one in the bottom right on the above image. I'd really like a better version of that one.

Check out this post on Chgowiz's blog if you want to see some pics of the Big Stupid Dungeon Party. I was a little distracted by the twelve players and the mummies and the twinkies and what all and forgot to get out my camera.