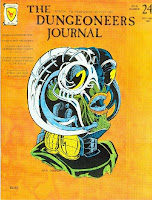 Like most respectable gaming rags Dungeoneer Journal #24 (December 1980) has an article full of new monsters. I love rules variants and DMing advice and all that sort of crap, but for me personally a decent game magazine has to include nuts & bolts stuff like monsters, magic items, spells, spaceships, etc. that I can drop right into my own games. Or even better, ready-to-rock adventures.

Anyhoo, I've shared crazy critters from other installments of the 'Monster Matrix' column a couple times before. Issue 24's Matrix brings us stats for what is in all likelihood the whimpiest god to ever to appear in D&D. Or possibly any other game. Ladies and gentlemen, I give you... 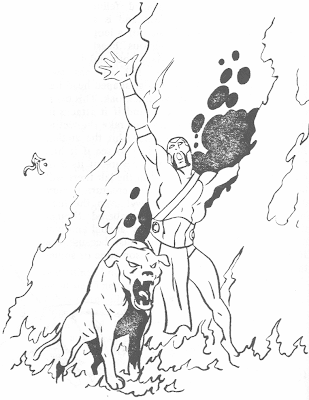 FIRE GOD!
Here's the entry for this dude in its entirety:

Fire God by Scott Zeppa
No. Appearing...1
AC...2
Hit Dice...3+1
Align...CE
HP...20
Fire God can only be hit by magical weapons. Attacker(s) must withdraw after four melee rounds for one round unless the attacker takes [a] Potion of Fire Resistance or wields a Sword of Cold. If not, the attacker must wait the one round before he/she may return to combat. The Fire God has a pet Hell Hound.

I feel pretty confident that Mr. Zeppa didn't own Gods, Demigods & Heroes when he wrote up stats for this guy, otherwise Fire God probably wouldn't be so weak. A three hit dice god kinda suggests that maybe he ran his campaign with only the Holmes Basic rulebook. Maybe all his deities are three hit dice and PCs who made third level in Zeppa's campaign were considered semi-divine. Holmes put quite a few badass monsters in his edit of the rules, so the gods themselves would have to be pretty careful! (On the other hand, the lack of any attack/damage info suggests pre-Greyhawk OD&D. You're just supposed to know that Fire God does one attack for d6 damage (presumably fire) because almost everyone does d6 damage.)
If you use Fire God with the rules in Deities & DemiGods he could actually still be a pretty bad threat. Even as a mere demigod he would gain sweet saving throws (2 or higher on all saves) and a bunch of at will abilities: command (no save), comprehend languages (including speaking and writing), detect alignment, gate, geas (9"), quest (9", no save), teleport without error, true seeing. The gate ability only applies to members of your own pantheon, so in this case I guess that means Fire God would be able to gate in his dog.
Under the DDG this dude would also get the ability to grant cleric spells up to 5th level. So you could set up this awesome scenario where Fire God hangs out at his sweet-ass temple, living the high life. The High Priest of the faith thinks his deity is a total douchebag and he KNOWS he could take Fire God in a fight, but if the god is slain the EHP loses his best spells, forever. The challenge for a low level party (incapable of a direct confrontation) would be to somehow provoke the EHP to strike in anger. If the priest wins the cult of the Fire God is totally hosed. If Fire God prevails at least the world has one less EHP in it.