My Wizard is Fight

So last night was session two of Stuart's brave efforts to run the game group through Keep on the Shadowfell. This time I think I got into the swing of making a 4e wizard work. I had some great fun with a flaming sphere effect. I even had the perfect figure to use. Don't ask me where I got this little toy, just say hello to Fire Buddy! 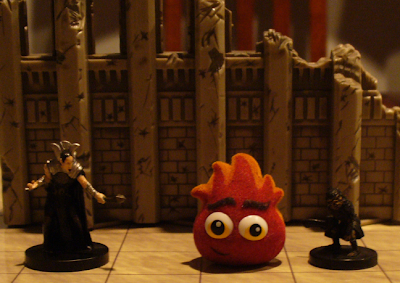 Yeah, my M-U wears a Ming collar and sports a soul patch where his beard should be. He's only first level. I'm sure it's just a phase he's going through.

*The next part contains SPOILERS for Keep on the Shadowfell, so considered yourself warned.*

So in the kobold lair there's a maniac goblin named Irontooth who apparently wrecks the shit of every party that faces him. Stuart told us that according to the internets, this guy is the module's number one source of Total Party Kills. Seriously, who writes this crap? I know DMs have always been free to beef up monsters and that giving humanoids levels has a long and beautiful history. But why the hell do you write a game where my puny 1st level Harry Potter has 23 hit points if all you're going to do is give the goblin in session #2 over a hundred HP? I just don't effin' get it. What is being accomplished by making 1st level the new 4th level and turning the goblins into hill giants? I've been in plenty of campaigns where the DM wanted to skip the first few levels, so we did. And I've also been in lots of campaigns where everyone slugged it out with rats and mosquitos for a their first thousand xp. The latter seems to not be supported anymore. I hear it's not "fun". Are kids nowadays afraid of rolling up new characters or something? [/angry old man]

But like I said, last night's game was fun. I enjoyed pushing my piece around and selecting my attack options. And setting kobolds on fire is always a good time. But I also couldn't shake this feeling that it wasn't very Dungeony or Dragony. I don't think it was a coincidence that Doug made a couple of BattleTech jokes during the run. ("I move here. Now that my legs are in the water I lose heat points faster." That sort of thing.) For my own part, I started having flashbacks to my mid-nineties obsession with the HERO System, where each fight consisted of pushing dudes around a hexgrid and trying to figure out what trick to use from your Multipower array. Said out loud it's not that different from what a wizard does in any edition of D&D, but I feel an essential difference in my gut.

At the end of the session we agreed to play a third session and that maybe we should add some strikers to the party. Anybody in the area want to run a Rogue, Warlock, or Ranger with my crew? If not, I may have to carry through with my threat to double up and run a ninja-themed Rogue. Before heading out the door, Stuart maybe put his finger on this whole 4e mess: if we're having fun, how much does it matter whether or not the game "really" is D&D? I think for me the answer is "it matters at least some", even setting aside the fact that what Hasbro markets has repercussions for the hobby at large.

Or to put it another way, as my wife and I got in bed last night I told her "I had a good time tonight, but I think I'd rather be playing Dungeons & Dragons."