[Sorry, Doug. I couldn't find the screencap you suggested. So I just quoted the movie as the title of the post.]

So last night Stuart ran a couple of encounters from Keep of the Shadowfell for the group. I played Owen, a human wizard loosely modeled after the protagonist from the film Dragonslayer. Doug played Morgan Ironclaw, a dragonborn paladin straight outta the pregens. Doug noted that for once the pregens Wizards created don't suck. And Pat played Bloodaxe Axebeard, a surly dwarf and one of those new-fangled laserclerics. Why do clerics now shoot lasers every round?

When I finagled Stuart into running 4e for us I figured I'd probably end up here on the Gameblog either declaring the game the Great Satan or eating massive crow and admitting it was the bee's knees. But mostly my reaction is "meh." It's a new edition of D&D. It does some stuff differently than previous editions, A LOT of stuff. Probably too much for my taste. Those sacred cows all the hip kids wanted to see dead and buried? From where I sit D&D is made of that stuff and very little else. But that alone doesn't make this new edition a bad game.

In terms of actually playing the damn thing it just didn't knock it out of the ballpark for me. We had some fun messing around with the tactical elements of beating up kobolds, but I wouldn't say any more so than playing 3.x with this crew.

My online pal Settembrini's concern that "the game plays your character for you" may be overstated, but after playing a couple fights I certainly see what he's saying. On any given round it seemed pretty clear that there was exactly one power suited to the tactical situation and if I didn't use it I was being a damn fool. Of course I opted to be a damn fool when I went after that spellslinging kobold with my quaterstaff but the little jerk had it coming. But still, having a longer list of mechanical tricks that my first level magic-user could accomplish felt a lot more limiting than playing the poor schmuck with one spell. With earlier MU's if I ran out of spells it forced me to come up with lots of on-the-fly shenanigans to beat the baddies. To understand the brave new world of 4e imagine a magic missile crushing the darkness, forever.

The most interesting thing I've noticed about 4e so far is how powergaming the system seems to work. Some people will try to tell you that the simplified character creation makes powergaming impossible. Those people lack vision. The munchkining of the game obviously lurks in synergizing among your teammates. The era of the overpowered "character build" may be over, but I predict that the smart munchkins will be all over "team optimization" like stink on poop.

Overall I had fun last night but the system had fairly little to do with it. I could have played any of a dozen crappy RPGs and gotten the same good times with these guys. We're going to try again in two weeks but unless something new shakes loose you can count me among the non-adopters of this new edition. So far it just isn't delivering anything I want out of a D&D that I don't already have.

The best thing about last night was the birthday present Stuart gave me. He commissioned Angela of Necropolis Studios to produce one of her custom "monstrous" dice boxes. I've been saying for a while now that Angela's dice boxes will be the thing that all the cool game junkies will need to own and now I've got one of my own. Check this baby out: 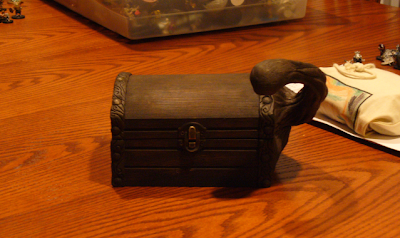 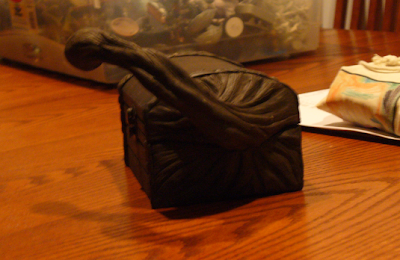 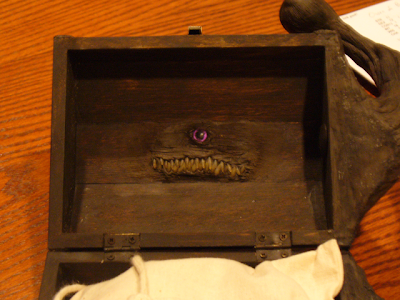 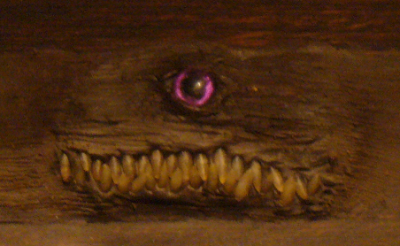