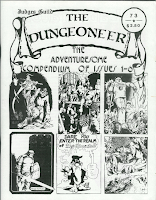 I give my highest recommendation to The Dungeoneer issue 1-6 compendium. I like the other issues of Dungeoneer a whole lot, but the compendium packs a whole lot of neat stuff between its covers. Among others things it contains Night of the Walking Wet, one of the greatest D&D adventure/mini-campaigns ever written.

But this post isn't about that. Instead I want to talk about a monster. Dungeoneer has some really great crazy-go-nuts monsters. We're talking stuff so far out that the folks who made the Fiend Folio would look at 'em and say "You've got to be kidding me." I love lots of the entries in the "Monster Matrix" column, but my favorite has got to be the Tinfoil Monster.

Pure genius. If Uncle Gary can make the Rust Monster and Bulette out of some old Japanese "dinosaur" toys, why can't Mark Norton crumple up some tinfoil and call it a critter? In fact I love the Tinfoil Monster so much, I did an Encounter Critical conversion and made my own custom miniature! 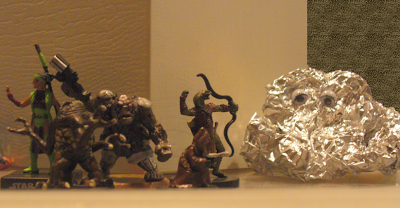 (Man, the dice rolls were unkind to that Mutated Dwarf.)

Reports of Goldfoil Monsters are completely erroneous. 2% of all Tinfoil Monsters have consumed enough gold treasure to add a slight golden sheen to their tinny skin. An Alchemist might be able to leach out 3-30 GC with a proper lab and d6 days work, but 2d6 GC worth of supplies will be expended in the process and a failed Alchemist roll will turn the gold into lead. Of course a clever con artist might be able to sell the monster carcass for much more than it is worth.

Imperviumfoil and Blackhole Metalfoil Monsters only exist in Fevered Dreams, and as such are sometimes sought out by Dream Witches and their ilk.