In part 1 of the Paul Czege Effect I described how Our Hero Mr. Czege came up with a hella-tight technique for distinctive and flavorful supers campaigning. In brief he recommends constructing your own super naming conventions so that you don't end with a world filled with the likes of Fill-In-The-Blank Man and Captain Whatever. It's a great idea, but Mr. Czege forgot somewhere along the way with great powers comes a great responsibility to be awesome, and instead chose to use his technique to support serious, mature superhero gaming. Think about that for a minute. Serious, mature superhero gaming. Let's ask our good friend Captain America what he thinks of serious, mature superheroing, shall we? 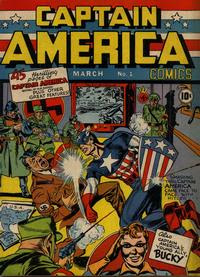 Oh, that's right. He's too busy punching the crap out of Hitler to be able to weigh in on this issue.

(Man, that cover never gets old.)

As regular Gameblog readers already know, I don't do serious or mature in my gaming. I save that crap for when I put on a tie and got to work. For me, a game has to pass the Three Trashmen Tests to be good: Is it loud at any volume? Is it annoying to grown-ups? And most importantly, is it stupid? Any game that says 'yes' to all three question is aces in my book.

Fortunatelty, Mr. Czege's basic technique ("new naming conventions") can be put to work in support of non-serious, immature play agendas. Just for grins, I'm going to outline the naming conventions of New Bronze City, a setting I just made up. New Bronze City is meant to sorta evoke Marvel Manhattan circa 1979 or so, without being tied down too much to its inspiration.

Rather than stick to one single rule like Czege's "all names must have prepositions", I'm going to build my naming conventions as a series of Do's and Don'ts. In the section below I'll be dropping the term 'Element' a lot. Don't freak out. I'm not trying to beat you with some new jargon. It's this simple: Superman's element is 'super', Captain America's element is 'America', The Hulk's element is 'hulk'. Got it?

Do name your character Mr. Element or Ms. Element.

Don't name your character Doctor Element unless they have actual medical skills. Too many civilians will assume you're a medical doctor, like that one time Higgins from Magnum PI ended up delivering a baby because he mentioned that he was a doctor. Doctor of Mathematics, that is.

Do name your character Professor Element if the super in question is some sort of egghead. No one cares if they are really a professor or not.

Don't name your character The Element unless they are really, truly badass. If you think you can stand up to The Doom or The Bat you can use The Element. Otherwise, don't go there.

So that's how you name the characters in New Bronze City. It's a little quirky, a little retro, and noticeably different from just another Marvel of DC ripoff setting without being so far off the beaten track as to confuse players.