I don't have any interest in Wizards' new minis game Dreamblade, but dang are some of the figures cool. This particular figure had to be mine: 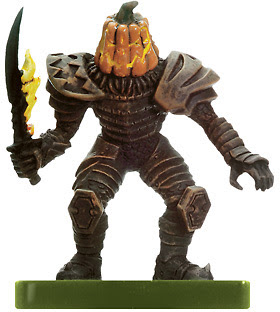 In Dreamblade this dude is the Knight of the Autumn Gate. That's a pretty cool title but to me he's the Bugbear King. I know he doesn't look anything like a bugbear, but at one time bugbears looked like him! The first illustration of a bugbear appeared in OD&D Supplement I: Greyhawk. Dig it:

Pretty much every subsequent appearance of the bugbear since then has depicted the giant goblinoids we all know and loathe. Turns out the creepy jack-o-lantern dude above was the result of a miscommunication. Gary Gygax once explained over at Dragonsfoot. "The pumpkin-headed bugbear was an artist taking literally my description of the monster as having a head like a pumpkin, i.e large, round flat oval."

The pumpkin-head version of the bugbear survived in Runequest under the name Jack-o-bear, so you can actually find a few lead minis of this throwback design. But a prepainted plastic figure was just too cool to pass up. Especially with that flaming sword, awesome armor, and wicked grin.